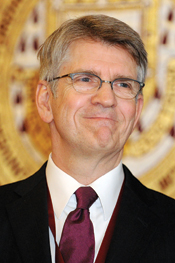 “Karl Rahner’s Legacy and the Frontiers of Theology Today,” which Hinze delivered on Feb. 11 at the Rose Hill campus, was a celebration of teachings of Father Rahner, a German Jesuit and one of the most influential among Catholic theologians who forged the modern understanding of Catholicism.

Fordham’s connections to Father Rahner run deep, as three faculty members were key translators and interpreters of his work. One of them, William V. Dych, S.J., professor of theology in the 1980s and 1990s, translated into English Father Rahner’s seminal work, Foundations of Christian Faith (Seabury Press, 1978).

Even today, Father Rahner’s dedication to searching sources of Catholic theology for ways to captivate and energize people in their everyday lives can be seen in the works of fellow Fordham theologians, said Hinze. He cited as examples of “new frontiers” in theology the works of his fellow theology department faculty Richard Viladesau, Ph.D., professor, in the area of aesthetics; Elizabeth Johnson, C.S.J., Distinguished Professor of Theology, in her feminist approach to the Christian understanding of God; and Jeannine Hill Fletcher, Th.D., professor, in her feminist approach to religious pluralism.

Besides being attentive to God’s pervasive self-donation and self-communication, Father Rahner also detected a mysticism of everyday life found among Christians, Buddhists, agnostics, and even atheists, Hinze said.

“This particular posture toward life experience established in him a great pastoral sensitivity to the questions and concerns of those around him,” Hinze said. Father Rahner was credited with writing more than 4,000 articles and books. The vast majority of his writings were “prepared in response to particular pastoral questions posed to him, or [ones]that he himself wrestled with.”

Although Ignatian spirituality was key to Father Rahner’s philosophy, Hinze noted that two years of studying with philosopher Martin Heidegger helped the Jesuit learn “how to think the unthought thoughts of a position, and to puzzle with unresolved questions or problems that came to light in a text.” Father Rahner felt that, in considering the development of doctrines, theologians have focused too exclusively on the past and not enough to open questions of a current and future development of dogma.

Hinze’s current work considers practices of communal discernment and decision-making in the church and faith-based community organizing in light of the mission of the church. Analogous to Father Rahner’s attention to the human quest for knowledge, freedom, and love, Hinze explores the search for human flourishing expressed in people’s aspirations and laments. Here Hinze finds fascinating connections between the convictions of Father Rahner, Fordham University, and the struggles for the well-being of citizens in the Bronx. He gave special attention to Bronx community groups that were influenced by Chicago community organizer Saul Alinsky.

In their struggles for housing, living wages, and economic democracy, groups like the South Bronx People for Change and the Northwest Bronx Community and Clergy Coalition are channeling Alinsky’s energies. Alinksy, an agnostic son of Jewish parents, developed lifelong bonds of collaboration and friendship with Catholic intellectuals, bishops, priests, and lay leaders with whom he did grassroots work for social justice.

“People from various theological traditions and disciplines, inspired by community organizing, can benefit from the wisdom of diverse schools of theology and interdisciplinary contributions from philosophy, sociology, economics, political science, and critical theory,” said Hinze. “This multifaceted encounter between ‘the schools and the streets’ is providing a rich opportunity for a lively research agenda exploring how the power of God’s grace works in communities as they struggle with destructive powers.”

The Rahner Chair was created thanks to the generosity of Stephen E. Bepler, FCRH ’64, and Kim Bepler. Joseph M. McShane, S.J., president of Fordham, praised the Beplers as a couple who live to find ways to support Fordham and the Society of Jesus.