Students interested in working with the Latino community as religious educators and ministers now have greater access to graduate study, thanks to a new scholarship at Fordham’s Graduate School of Religion and Religious Education (GRE). 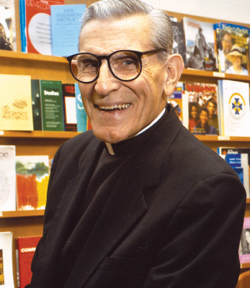 Brothers Vincent Novak, S.J., above, and Joseph Novak, S.J., (below) after whom the Novak Scholarship is named.

Launched this fall, the Novak Scholarship Program provides financial support and mentoring, including career advice and course consultations, to two students each year. Students admitted to the program will receive a full scholarship over a two-year period to pursue a master’s degree in religious education, pastoral care, pastoral counseling and spiritual care, or spirituality.

“Our mission is to provide financial support and mentoring to students with a desire to minister to and serve as leaders within the Latino community as religious educators, pastoral minsters, and spiritual directors,” said C. Colt Anderson, Ph.D., dean of GRE. “The Novak Scholarship Program will provide an added incentive that channels students to strive for academic excellence and encourages the Latino community to participate in Fordham’s high-quality programs that cater to distinctive and diverse viewpoints.”

The scholarship is named for the two Novak brothers of GRE—Vincent M. Novak, S.J. the founding dean of GRE, and Joseph Novak, S.J., a longtime faculty member and interim dean. The pair had a particular commitment to the local Latino community, said Claudio Burgaleta, S.J., associate professor at GRE, who recalled a program from the 1980s that Father Vincent Novak had dubbed “Fridays at Fordham.” 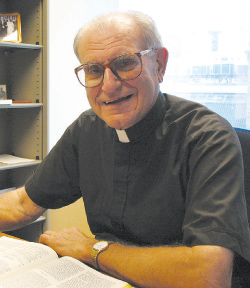 “It was a successful program that allowed a number of members from the Latino community to avail themselves to classes specifically for them on Fridays,” Father Burgaleta said. “This new program is a way of both continuing those initiatives and honoring the two Novak brothers, who were integral to starting GRE.”

Though targeted toward working with the Latino community in ministry, the scholarship is not limited to students of Latino origin, Father Burgaleta said.

“It’s open to people of any ethnic background who want to work with the Latino community and who have shown a track record of working with that community,” he said.

Alongside fostering outreach to the Latino community, the program can also serve a unique role in preserving Catholic identity, Anderson said. With membership declining both in religious communities and in the church overall, there is a critical need for leaders in ministry who are knowledgeable about the Catholic tradition.

“There are many positions opening up in Catholic institutions such as healthcare, colleges and universities, and Catholic charities, all of which need people who are trained in the Catholic tradition and who have specific skills related to the work they do,” Anderson said.

“This program will develop a core of talented people who will go out into the community serving in ministry, in community organizing, and in passing on the faith.”