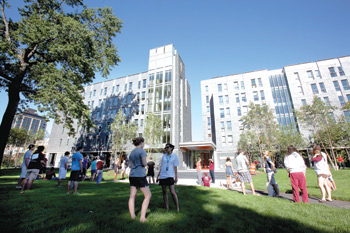 New residents get a close look at Campbell, Salice and Conley Halls on Aug. 30.
Photo by Bruce Gilbert

For Katherine McNabola, a senior in the College of Business Administration, the most special part about moving into Campbell Hall was that no one had ever lived there.

Katherine’s mom, Cheri McNabola, said she was thrilled that her daughter will live in the residence, which—along with Salice and Conley Halls (CSC)—officially opened its doors on Aug. 30.

Cheri’s joy was apparent, even though she had to ride the train from Connecticut to Rose Hill by herself that morning. With the family SUV full of Katherine’s stuff, there was simply no room for her.

“It’s OK; I’m allowed to embarrass her. I’m her mother,” Cheri joked on her way into her daughter’s four-person apartment. Meanwhile, dad Jack McNabola wheeled in a tall stack of plastic containers—all belonging to Katherine.

“At least she’s got the room for it,” added Cheri, as she surveyed the sunny environs. “This apartment is wonderful. It’s got such great light and even a living room.”

Katherine McNabola and her three roommates were among 460 students to inaugurate CSC.

Campbell Hall was built through the generosity of Robert E. Campbell (CBA ’55) and his wife, Joan M. Campbell. Thomas P. Salice (CBA ’82) and his wife, Susan Conley Salice (FCRH ’82), are the benefactors of Salice and Conley Halls. They are the first living spaces to open at Rose Hill since O’Hare Hall in 2000.

The new halls consist of four towers in two buildings on the southwest side of the campus near Fordham Road. Approximately 70 percent of residents are seniors, while the rest are a mix of juniors and sophomores.

The apartments are fully furnished and boast air conditioning, climate control within apartments and kitchens equipped with dishwashers and microwaves. It is the kitchen that most excites Matt Tracey, a senior in Fordham College at Rose Hill.

“I cannot wait to cook!” he said. Matt’s mother, Jolene Tracey, promptly chimed in that she will miss her son’s cooking.

“He sure has some lucky roommates,” she said.

Matt said that the first dinner at his apartment would be a lamb dish with a special reduction. “All you need is a skillet,” he said. 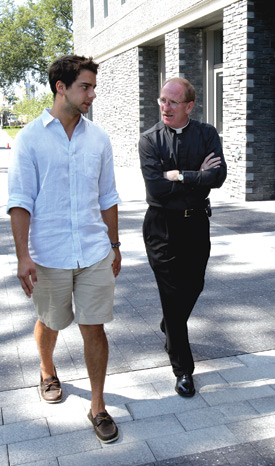 “I can’t tell you enough how happy I am that I no longer have to buy a meal plan,” he added.

The new residence halls are a step up from the drab dorm rooms of yesteryear. They feature brightly colored accent walls in the living rooms and bedrooms, and sleek lighting fixtures throughout. The first-floor laundry room is another bonus. Student athlete Kim Capicotto, a senior in the College of Business Administration, said she likes the open design of the “laundry lounge.”

“It’s much better than having to go to the basement—and the appliances are brand new, which means everything dries faster,” she said.

Amenities and interior design are not the only perks for CSC residents. The new halls will offer a variety of programming, said resident assistant Alex Slavtchev, a senior in Fordham College at Rose Hill.

“We want to foster community,” Slavtchev said. “A lot of programming will focus on transitioning from college to real life. It’s not just for seniors; it’s something that sophomores and juniors should start thinking about, too.”

Career Services at Fordham will be on hand every Wednesday to help students polish their resumes and plan their careers. The Office of Academic Affairs also will be an integral part of programming, as will the Office of University Mission and Ministry.

In fact, the leader of University mission and ministry was CSC’s first resident, having moved in two weeks ago.

“I was the only guest at a 460-room hotel,” said Monsignor Joseph G. Quinn, vice president for University mission and ministry. His residence continues Fordham’s tradition of an “integrated living community” style of housing.

“These are truly 21st century facilities; our students are so blessed to have such extraordinary residences,” Monsignor Quinn said. “I can’t get over how quiet the buildings are. I can’t hear the Metro North trains. It’s amazing.”