William Meezan, Ph.D., grew up in the University Heights section of the Bronx. His parents were socialists during an era when the political movement experienced a negative Cold War tinge. 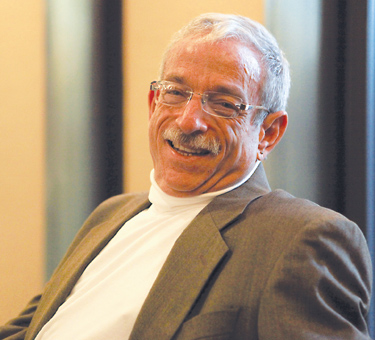 William Meezan, Ph.D., is being installed as the GSS’s Quaranta Chair for Social Justice for Children this spring.
Photo by Tom Stoelker

“I was brought up with an extraordinary sense of people’s responsibility for each other and what a just world could look like,” said Meezan, who will be installed as the Mary Ann Quaranta Chair for Social Justice for Children in April at the Graduate School of Social Service.

Today, Meezan is internationally recognized as a public policy expert on the welfare of families and children in the child welfare system and the mental health impacts of those it serves. But after 40 years of work in the field he said he is disillusioned about the state of American family in general and in the social welfare systems that are supposed to support them.

“I’m not convinced that things are going to get better,” said Meezan. “The values this country holds around families are noxious. We don’t support parents until they get into trouble.”

Meezan said the endowed chair appointment will enable him to spend the next 18 months working on two “think pieces” about the child welfare system. The first piece will deal with why the current system has lost its integrity, and the second will deal with how to get it back on track.

Meezan attended the University of Vermont as a pre-med physics major before shifting his focus toward social work. From there he went to Florida State University for his master’s degree.

When Meezan came back to New York, he worked at a residential treatment center for emotionally disturbed children in Westchester. There, he encountered a young boy who had survived on the streets for nine months. During the boy’s case conference, Meezan argued that the boy should be released from the institution and placed in a foster home. The decision makers felt otherwise and Meezan nearly left the field in frustration.

A mentor tempered his anger by encouraging him to move on to Columbia University’s Ph.D. program to make a difference in policy. His dissertation, which dealt with child welfare worker decision making, directly addressed the frustration that arose from his Westchester experience.

Children’s services are provided either in the home or through the foster care system to the children and their families that are at risk of, or have suffered from, child abuse and neglect. Typically, these local, state, or federally funded services provide family support, preservation, foster care, group or residential care, and adoption.

Meezan said that families involved with child welfare systems often have a variety of state-mandated timelines they must adhere to. The deadlines and procedures imposed by the local, state, and federal policies leave parents scrambling to meet conflicting deadlines.
“They have multiple clocks that are running against them,” said Meezan. “For example: There’s the child welfare clock: If your child has been in care 15 out of the last 22 months, you have to terminate parental rights.”

Meezan noted that a great majority of the children who come into out-of-home care have an addicted parent who spends much-needed time waiting for services to address their addiction.

“It can sometimes take months before a child’s parent can get the help they need for addiction,” said Meezan. “So the addiction’s clock often counteracts the child welfare clock.”
Then there’s the TANF (Temporary Assistance for Needy Families) clock. Families can only be funded for up to two years, plus TANF has work requirements.
“How do you meet your other obligations and attempt to get your life together and reclaim your children if you have work requirements,” asked Meezan. “And on top of all of that is a child’s sense of time. To you and me a month isn’t a long period of time. But to a kid it’s forever.”

Meezan holds no illusions about the political realities for improving the child welfare system. He realizes that his socialist leanings may be unpopular with some. But while he favors progressive approaches to universal supports for families, like those found in Western countries like Sweden, he doesn’t define himself by any political philosophy; he considers himself a realist.

“I work at the residual end of the spectrum and I don’t think you can fix the problems at that end until we fix the way we are treating all of our families today,” he said.

“Look how [our society]views what causes social problems. As long as we believe that it’s the mother’s fault, and that structural issues have no place in the cause of her problems, then we won’t develop solutions that are at the core ofher troubles.”

(Meezan will be installed as Fordham’s Mary Ann Quaranta Chair for Social Justice for Children on April 15.)