Fordham has welcomed the Rev. John P. McDonagh as the new director of campus ministry at the Lincoln Center campus. His addition is the latest step by the Office of Mission and Ministry to renew the face of its religious presence on campus. 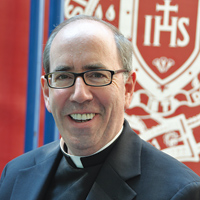 Father McDonagh joined Fordham on July 1 with 11 years of experience ministering in higher education, most recently at Duke University, where he was associate director and campus minister of the university’s Catholic Center. Prior to his position at Duke, Father McDonagh was a Catholic religious adviser at Amherst College and director of campus outreach in higher education in the nearby Diocese of Springfield, Mass.

He studied for the priesthood at Rome’s Gregorian University, where he obtained a License in Sacred Theology. He completed studies at Ottawa’s St. Paul University for a License in Canon Law and at Springfield’s Western New England College for a Master’s in Business Administration.

During his time at Duke, Father McDonagh sponsored an arts and sciences course, “Catholic Church: Change and Challenge,” to explore the intersection of the church and society in a post-Vatican II world. He has interests in 19th and 20th century visual art and contemporary American theatre and a strong interest in Ignatian spirituality.

“When St. Ignatius was a young person choosing to study, he chose to be in a big city—Paris,” Father McDonagh said. “I believe that if he were alive today, he’d be at Fordham, right in the middle of it all, which makes me all the more excited to be here.”

Father McDonagh said he hopes to “animate campus ministry” by increasing its student-led dimension and by encouraging members of the Fordham community to explore unknown spiritual territories.

“Discovering the holy in one’s life is an amazing experience,” he said. “I’d like to enable young people to trip over the presence of God in their lives.”

Other new appointments to Fordham’s mission and ministry office include:

“We continue to strengthen and revitalize the work of campus ministry in sustaining and advancing the Jesuit and Catholic identity of Fordham,” said Monsignor Joseph G. Quinn, vice president of University mission and ministry.