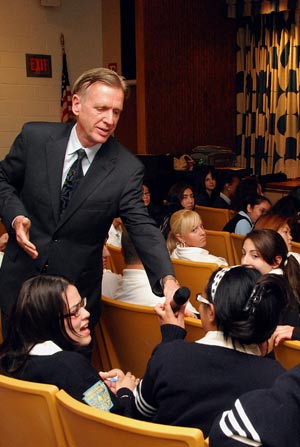 Fordham University is poised to establish a new body of research on how people can flourish on the job in times of stress.

The Human Resiliency Institute, established in May at Fordham College at Lincoln Center, will bring interdisciplinary study to the techniques that allow some people to easily handle tense times at work.

For its first project, the institute will focus on the airline industry—specifically, three airports in the region where employees are getting training in how to solve problems, defuse tensions and bounce back from moments of conflict and angst.

“The front-line people … work in a highly stressed environment,” said James Hennessy, Ph.D., dean of the Graduate School of Education (GSE), where the institute is based. “Helping them deal with those stresses is what resiliency is all about.”

The director of the institute, Tom Murphy, developed a resiliency training program for the airline industry. The training also offers lessons for other sectors where tensions run high.

“There’s an opportunity to carve out an area of research focusing on the effects of resiliency training on workforces, wherever those workforces happen to be,” he said.

Murphy said hospitals have already started inquiring about his training program, Resiliency Edge. He got the idea for the program after seeing how airline employees responded to the 9/11 attacks.

As a longtime customer service expert who trained thousands of people in the airline industry, he was struck by how vigorously they performed on the job, despite their anguish.

“I saw people lose a lot,” he said. “I could see them being brave and strong, and I wanted to see what the source of their strength was.”

In his book, Reclaiming the Sky, he gives some examples. Anne MacFarlane, an information agent at Logan International Airport in Boston, sought to help others after losing her daughter—also an airline employee—on United Flight 175.

“Rather than withdraw from life, she went right back into it, which was a powerful lesson in resiliency,” he said.

The program shows workers how to manage pressures and focus on solving customers’ problems through adaptability, optimism, engagement and proactivity.

He brought Resiliency Edge to JFK International Airport in May, where 97 percent of participants found it effective. The training kicked off at Newark Airport on Nov. 19 and came to LaGuardia Airport on Dec. 16.

Research will focus on potential benefits such as cost savings and better employee retention and morale, Murphy said. Safety will be another study area, since employees who are more attentive to customers may also become more aware of their environment.

“That’s the purpose of the institute, to come in with that evaluative arm,” he said.