skip to main content
Return to Fordham University
You are at:Home»Colleges and Schools»Graduate School of Education»New GSE Program Aims to Benefit Undergrads and Struggling Schools 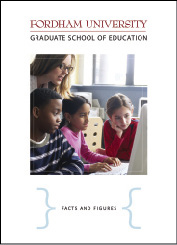 Last month, the school announced on its blog that the scholarship-funded program, Teacher Residency Scholars Program in Adolescence Education, will combine academic coursework with an ongoing residence in a classroom setting.

The scholars—undergraduates pursuing careers in teaching—will serve as student teachers in four Bronx schools, gaining hands-on experience in the classroom while assisting schools in their neighborhood. Following completion of the program, residency scholars will be required to teach in struggling New York state schools.

The program, funded by a $2.5 million grant from the state Education Department, will allow participants to pursue a master of science in teaching and become eligible for certification in New York.

The school also released its latest edition of “GSE: Facts & Figures,” which outlines its most recent statistics, including its ranking in U.S. News & World Report’s top 20 private schools of education and its participation in the Carnegie Project on the Education Doctorate.