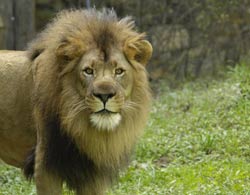 The New York State Department of Education has given Fordham University and the Bronx Zoo the go ahead for a joint master’s of science program in adolescent education. Barring unforseen changes, 25 students will be taking classes at Fordham and the zoo this summer.

Pat Shea-Bischoff, Ph.D., clinical associate professor in the Graduate School of Education, couldn’t be happier. As coordinator of the adolescent teacher education program at GSE, Shea-Bischoff is developing the curriculum that will give students access to the world-class facilities of the Wildlife Conservation Society (WCS). In addition to the Bronx Zoo, the society runs zoos in Central Park, Queens and Brooklyn, as well as the New York Aquarium in Coney Island.

Unusual in its focus on conservation science, the program is expected to attract teachers who want to specialize in science as well as employees of institutions dedicated to wildlife conservation.
“Many of these informal educational institutions are introducing professional development, and they’d like to have certified people on their staffs,” Shea-Bischoff said. “Just yesterday, we approved our first person in the cohort.”

The woman, an employee at a Connecticut aquarium, is a perfect example of a representative from an informal science institution teaming up with a degree-granting institution, Shea-Bischoff said. In addition to a master of science degree in teaching with an emphasis on conservation life science, the 36-credit program will lead to initial New York state teacher certification in adolescent biology for grades 7 through 12.

Unlike some collaborations, classes held at WCS sites will last a full day, Shea-Bischoff noted, adding that the Bronx Zoo, which almost single-handedly saved the American Bison from extinction in 1907, is the best possible lab a biology student could have.

“This is sort of the most famous and important zoo in the world, because it truly is a conservation center,” she said. “The fact that students will be able to a walk around the zoo, have their classes right on site and go behind the scenes is just incredible.”