skip to main content
Return to Fordham University
You are at:Home»Colleges and Schools»Gabelli School of Business»New Gabelli Curriculum Applies all Disciplines to Business 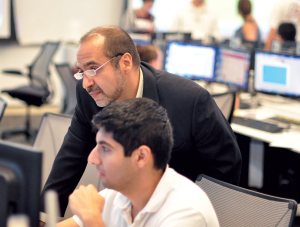 Hooman Estelami looks over the work of Madhav Kapoor, seated, in a new simuation-exercise class at Hughes Hall.
Photo by Patrick Verel

Madhav Kapoor was rattled. Staring at a computer screen on the ground floor of Hughes Hall on a recent morning, the Gabelli School of Business (GSB) senior, who was doing a simulation exercise in class, had just learned that his main competitor had dropped the price of a pirate detection radar system from $1,699 to $799. The price war had sent Kapoor’s return on investment plunging from 17 percent to -13 percent. He had to respond, but how?

As part of his simulation, Kapoor needed to compete and still maintain market share, “but this rate is killing me,” he lamented out loud to no one in particular.

As Hooman Estelami, Ph.D., professor of marketing, hovered nearby, Kapoor’s fellow classmates wrestled with the same challenge, toggling between one screen that simulated the eight-year life span of a fictional company, and another where they tracked their progress on spreadsheets.

This first-day exercise was a warm-up for three simulations that students will be taking this semester as part of the school’s newly launched integrated business core curriculum. Estelami said the goal is to give students an opportunity to apply all the skills they’ve learned to running a business in real time, where they get instant feedback from the market.

“How a pilot reacts to an aircraft with an engine on fire, or how a surgeon reacts when an artery has just burst—these are situations where you cannot panic; you have to have a logical way of responding,” he said.

“Sometimes the best way to respond is counterintuitive. The idea is to put the students through price shocks and intensive competitive reactions, and then allow them to observe the reactions of the marketplace, and to see how they would guide the organization.”

During the simulation, students make decisions related to the launch of a product, such as whether to discontinue it, how much to spend promoting the company image, and whether to improve quality or service related to the product.

“They are very much the kind of decisions a typical manager has to be decisive about,” Estelami said.

“You can’t ‘roughly say’ what the price of something is going to be, or ‘roughly say’ how much staff you’re going to have. You have to be very clear as to what those numbers are.”

Dorothy Klotz, Ph.D., a professor of management systems who was largely responsible for the curriculum’s implementation, said that planning for the change—the first major change in the college’s curriculum in 20 years—began in 2008. Following a gradual rollout involving a pilot group of students that began in 2009, the curriculum was ultimately scaled up for the entire school.

Inspired by a model used by the University of Virginia’s McIntire School of Commerce, the faculty developed new course content that emphasizes applied learning. They rearranged the order in which certain classes are taught to ensure the students were learning what they needed when they needed it most. The Business Communications course, for example, develops communication skills, and puts these skills to use in crisis management, media relations, and other organizational situations.

Students are given a broad business framework starting in their freshman year with The Ground Floor, a required class that emphasizes writing, critical thinking, and applied learning. In their sophomore year, they’re exposed to all business disciplines via a “business challenge” that tasks them with researching and planning for a real company.

By their junior year, students are ready to do a deep dive into the area they choose to focus on, like accounting, finance, or marketing. By the time they reach Estelami’s class, students are able to piece together knowledge from multiple disciplines.

“You don’t discuss a concept and then have a nice little problem at the end of the chapter,” said Klotz. “You have to recognize what information you need, you have to retrieve it, and then you have to make a decision based on it.”

This is harder than it seems, and in fact Klotz proudly notes that many students refer to GSB’s new sophomore-year curriculum as “boot camp.”

“The mind doesn’t naturally want to integrate things. What the students initially see, they can’t get a handle on it, and they really struggle with these concepts,” she said.

Donna Rapaccioli, Ph.D., dean of the Gabelli School, said that applying lessons to real-world settings and companies now permeates every aspect of classwork at the school. One result is that students are forced to confront the unknown.

“When we set out to design the core, we wanted to make sure they were able to deal with what we call ‘strategic ambiguity.’ We wanted students to be able to make decisions without enough information, and one thing that a simulation allows you to do is think about ‘What ifs?’” she said.

“There are many perspectives, and one’s assumptions really impact the outcome.”

Estelami said the simulations-based training seems to be working. One former student, he said, recently emailed him that he’d been picked out of among 300 employees by his company’s CEO and asked to share his opinion about a product.

“He responded in a way that was very similar to the way our simulation-based training reprogrammed his decision styles. The CEO acknowledged him and co-workers applauded him,” he said.

Kapoor, meanwhile, resisted the temptation to plunge headlong into a price war in his radar-detection product simulation, and, although he didn’t do as well as he’d hoped, he did come out all right in the end. He wasn’t discouraged.

“How you perform on it doesn’t really matter as much as what you learn from it,” he said.