Latham, a professor of history, joined the faculty in 1996 and was appointed interim dean of FCRH in March 2009.

“In the course of his tenure as interim dean, Michael Latham has devoted himself to enhancing and strengthening the college’s efforts in the areas of international studies, science education and student advisement,” said Joseph M. McShane, S.J., president of Fordham.

“I am confident that he will lead the University’s oldest and largest academic unit with real distinction.”

In addition to his own scholarship, he has worked on behalf of fellow faculty members as part of the Faculty Senate, the senate’s executive committee, and its committee on salary and benefits.

“As a professor and interim dean at Fordham, I’ve developed a deep commitment to the University’s mission. The chance to lead such an outstanding college is a great honor, “ he said. “We have terrific opportunities. We have outstanding faculty members and tremendous students. We have the potential to take dramatic steps forward.”

Delivering the State of the College address to alumni, Latham reported that FCRH is weathering the economic recession as well as can be expected. 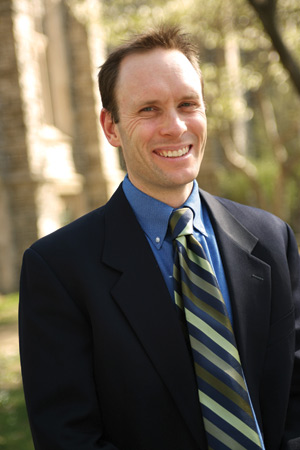 Despite the turmoil, FCRH avoided making budget cuts commonly seen in other colleges across the country. No employees lost their jobs due to the recession, and although the college was forced to institute a hiring freeze, it is now preparing to hire again.

Latham said he has set three preliminary areas of emphasis:

• undergraduate research across all academic disciplines;
• development of the sciences;
• and international education.

Undergraduate research is highlighted at a rapidly growing spring symposium. This year, a newly launched research journal will coincide with the event.

“To not only acquire knowledge, but actually to help create it gives our students a much greater sense of investment in their own educations,” Latham said. “It gives them a sense of excitement about the fields they study, and it has some terrific benefits as they apply to professional schools and graduate schools in the arts and sciences.”

With regard to the sciences, Latham said that FCRH students have had impressive success with comparably modest resources, and that the college has the potential to make exciting advances, especially in interdisciplinary programs.
International education, he noted, is an obvious priority for the Jesuit University of New York.

“If we’re really serious about preparing students to be leaders in a society that is increasingly connected globally, we must acknowledge that our students are likely to live outside of the United States at various points in their careers,” he said.

“Whether it’s the study abroad program, or the ability to learn lesser-known languages, or the opportunity to intern with NGOs in New York City that deal with human rights or economic development—providing these international opportunities is an important part of the mission of the institution.”

Even with his new administrative duties, Latham, who earned a bachelor’s degree from Pomona College and master’s and doctoral degrees in history from the University of California at Los Angeles, plans to stay involved in research.

He recently taught a graduate tutorial and an Ignatian education seminar. His latest book, The Right Kind of Revolution: Modernization, Development, and U.S. Foreign Policy from the Cold War to the Present (Cornell University Press) was published last year.