skip to main content
Return to Fordham University
You are at:Home»Colleges and Schools»Gabelli School of Business»New Curriculum Challenges Gabelli Students to Think on Their Feet

The scene in the McGinley Center Ballroom on Dec. 12 had all the trappings of a corporate lunch meeting. 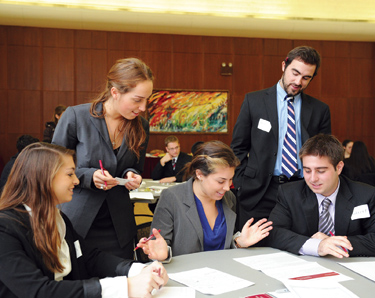 Gabelli students in Business Simulation II craft their response to Challenge Six as part of their final examination.
Photo by Chris Taggart

Young men and women dressed in sensible shoes, blazers and jackets sat at tables, listening intently, taking notes, and huddling among themselves before answering pointed questions.

These were no mere meetings, though. Rather, the four-hour simulation was the final exam for Business Communication II, a course offered to juniors in the Gabelli School of Business.

The goal of the exam was to put students into the shoes of senior business executives, where they would face the pressure of real-world business challenges requiring effective communication.

It was all part of Gabelli’s new Integrated Core Curriculum, which was unveiled in fall of 2009 for a select group of students and has been implemented steadily since then. It will be fully in effect by the next school year.

Students used to spend their first two years immersed in liberal arts requirements before taking business classes during their junior year, said Donna Rapaccioli, Ph.D., dean of Gabelli. Students in the new curriculum are introduced to business strategy, management, accounting, and marketing in their sophomore year.

“The idea was to allow them to understand business and then choose their arts and sciences electives to complement what they’re studying. For example, if they’re studying to be marketing majors, it would be good for them to take anthropology and sociology. Under the old curriculum, they might not have taken marketing until they’d already taken their liberal arts electives,” she said.

“The goal is also to get them to think more broadly about the role of business. It’s not just about maximizing shareholder wealth; it’s about stakeholder value. So as early as sophomore year, they’re challenged to think about some pretty complex issues,” Rapaccioli said.

They received eight challenges, according to the following topics:

• an introduction of their company;

• a negotiation with a supplier;

• giving effective feedback to each other; and

• a reflection on the day.

Meghann L. Drury, Ph.D., assistant professor of communication and media management, said that the challenges were heightened by strict time limits maintained by facilitators. Her hope is to make students understand how much preparation is required for even having an effective conversation and how to deliver clear, succinct messages in a short period of time.

“I’ve had students who are not going down the traditional communications route for a career, but are instead pursuing accounting or finance, and I’ve told them, ‘Even though you’ll be crunching numbers, you’re still going to have meetings with your team or your supervisor. You’ll be facing crises, and you’ll have to articulate a response. This simulation prepares you for those encounters,’” Drury said.

Amanda Kawczak, a finance major whose team represented WalMart at the simulation, said she was nervous at first, but relaxed once it got underway because her team had done copious research on the company.

“I never really felt pressured by anything going on, and it was really great to be a part of a team, because if you weren’t really strong in one area, like negotiation, others stepped in and took the reins in that instance,” she said.

Andrew Larocca, who is also majoring in finance, was on a team that represented Nike. He said that he enjoyed the structure of the simulation, although his team got bogged down when a simulation facilitator—pretending to be a CNN reporter—tried to get them to admit that their CEO had engaged in insider trading.

“The instructor was supposed to be very combative, and I think one of us might have slipped up and said he may be guilty. So that was a bit of a surprise,” Larocca said.

Nancy Tetreaux, a facilitator for the simulation who has worked as a human resources director for 25 years and teaches business communication and ethics and leadership at St. John’s University, was impressed with the group with whom she worked, even if they seemed a little intimidated by the time limit.

“If the pressure wasn’t there, they could talk forever about how to solve these problems. The time pressure is important because it forces them to come to decisions and collaborate or not. Somebody’s got to take a leadership role or the team is not going to be able to get through the exercise,” Tetreaux said.

Noting that she is pursuing a doctorate in communication and media studies at Rutgers, Tetreaux said the simulation was an intriguing teaching model.

“It makes me think of more creative and useful ways to go through the final exam process with my students. I think the Gabelli model is more beneficial for students, and much better in terms of time management,” she said.

“The students don’t have to drag some hideous bunch of questions off to the library and suffer for hours, and I don’t have to sit at home burning the midnight oil grading papers. We all prepared, we all showed up, we all did it, and now we can all go and celebrate.”