Iftekhar Hasan, Ph.D., was formally installed as the inaugural holder of the E. Gerald Corrigan, Ph.D., Chair in International Business and Finance on Tuesday, Feb. 7, at Fordham. 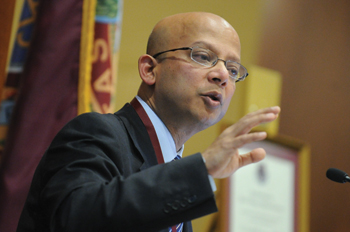 In his inaugural lecture as the Corrigan Chair in International Business and Finance, Iftekhar Hasan, Ph.D., showed it is possible to quantify the benefit companies derive from having CEOs with diverse backgrounds and connections.
Photo by Chris Taggart

Hasan, a prolific scholar who joined the Fordham Schools of Business faculty in the fall, detailed his latest research in a lecture titled “More Than Connectedness: Heterogeneity of CEO Social Networks and Firm Value.”

Hasan asked the question, do companies with CEOs who have diverse social connections create higher value to firms? And can that value actually be quantified?

The answer, he said, was yes on both counts.

His study measured different aspects of heterogeneity such as gender, ethnicity, education, occupation, and country of origin of 3,650 CEOs from 2,682 companies between 2000 and 2007. The study assigned a ranking to each company and then used four different “channels”—innovation, new revenue generation, better investment and lower cost of financing—to measure company value.

By factoring in CEO turnover, Hasan also addressed for the
possibility of what he called a reverse causality (where companies that are already successful are the ones that hire CEOs with high levels of heterogeneity). He concluded that a greater diversity of gender and international exposure had the highest effect on a company’s value. 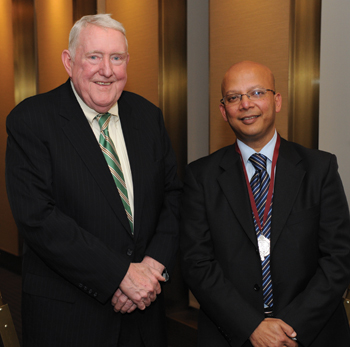 “These sort of results will hopefully get our corporate management to think about how, given the changing society and the changing globalization of business, this sort of hiring process of upper management and board members can be value-added for the company,” he said.

“Diversity and heterogeneity are a tangible asset, and I’m happy to have some academic evidence, through the lens of the CEOs, to see that it matters to the corporate profit.”

The evening was also a chance to honor E. Gerald Corrigan, Ph.D., GSAS ’65 and ’71. Corrigan, managing director at Goldman Sachs and chair of Goldman Sachs Bank USA, earned his master’s and doctorate in economics at Fordham. His generous gift was responsible for the creation of the chair.

Corrigan remarked that it was clear that the chemistry at the University is such that it is poised for greatness. He noted that the fields of economics and finance have come to focus too much on quantitative skills, and not enough on soft skills—such as governance, business and economic history, institutional adaptation and evolution, and ethics. These are areas where Fordham can make a difference, he said.

“Fordham University, by virtue of its Jesuit tradition, its culture, and to say nothing of its location here in the heart of New York City, is uniquely positioned to provide leadership in helping to stimulate constructive and creative thinking about the philosophy of business and economic education,” he said.

The event was sponsored by the Office of the President.