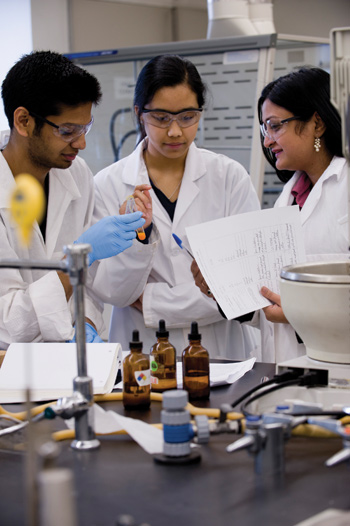 In November 1968, the new chemistry building rising at the southern end of campus was named for the Fordham trustee whose $2.5 million gift covered a big chunk of its construction costs.

The trustee, John A. Mulcahy, was a native of Ireland who attended City College of New York and worked his way up to the presidency of the Quigley Company. At the time of the building’s naming, one of his sons was enrolled at Fordham and another had graduated. The latter, who died this year, served as a professor and dean at the University.

The new building doubled the space available to the Department of Chemistry and continued the discipline’s ascent at Fordham, begun 60 years earlier through the efforts of Edward Tivnan, S.J. Tivnan, who had a doctorate in chemistry, taught the University’s first real course in organic chemistry in 1908 and, as University president, set aside funding for the newly created graduate and undergraduate chemistry department.