skip to main content
Return to Fordham University
You are at:Home»Inside Fordham»Faculty Reads»In New Book, A Fresh Look at a Long-Suffering Region

To better understand the history of the United States, one should include the people who were displaced from lands they once called home, says Steven Stoll, Ph.D., professor of history.

That story includes not only Native American tribes evicted by English and later American settlers, but also poor whites who once called the mountains of Appalachia home.

In his new book, Ramp Hollow: The Ordeal of Appalachia (Hill and Wang, 2017), Stoll visits an area just outside of Morgantown, West Virginia, to explore how the people who once lived there were pushed out and forced to surrender a self-sustaining, agrarian life in exchange for a wages-based living tied to coal mining companies and lumber mills.

“I wanted to write a book about notions of progress and why we think of certain people as being in its way,” he said. 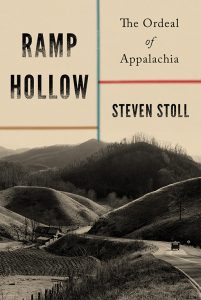 “How is it that we refer to billions of people in the world as backward and primitive, as being either incapable of what we consider to be progress or in need of some kind of transformation in order to be part of the ‘modern world?’ I see all of these characterizations as fictions.”

Stoll has studied the reasons why people get kicked off their land, and in Ramp Hollow, he interprets it through the characteristics of capitalism as it originated in seventeenth-century England and the way it organizes life in the United States. In that system, land and labor have to become commodities, and both need to be free from any traditional claims on them. The process is known as “enclosure.”

“In enclosure, not only does the lord take control of a piece of land and turn it into private property, but laborers are also available because the peasants who lived on that land and produced their own livelihood now need to make a living. They make that living by earning wages sometimes in the very fields they tilled for their own good,” he said.
“Enclosure is essential to capitalism everywhere; otherwise people who are producing their own wherewithal have no need to work for wages.”

Appalachia is an ideal archetype of enclosure, he said, because coal mining transformed the region very quickly. Eastern elites, like English lords, saw the transformation from an agrarian to an industrial/capitalist economy as necessary.

The book focuses on the formation of the rural working class during the 19th century. It details episodes such as the Whiskey Rebellion, the founding of West Virginia, and the arrival of timber and coal companies. Stoll relied on records he discovered during trips to the area, like a trove of documents from the Flat-Top coal company stored haphazardly in a dilapidated library in Bluefield, West Virginia.

“The archive in Bluefield began as the obsession of one person who’d collected an enormous trove of documents. Nothing was catalogued, things were just laying around. I’d never seen anything like it, but that’s where I found some of the most important documents in the making of the book,” he said.

Giving a Voice to the Voiceless

To give a voice to the voiceless, he also paired previously unpublished letters by residents with literature by authors born and raised in the mountains. One of these was G.D. McNeill, whose collection of short stories, The Last Forest (1940), includes a story called “The Last Campfire,” about a group of men who return to their boyhood home for one last camping trip. As they take in the view of a mountain called Big Black, that had been so important to all of them, “they cry out at the sight of the barren mountainside,” said Stoll, upon seeing how clear cutting had stripped it of vegetation.

“Those documents showed me the transition that people went through, from autonomy in their mountain households to dependency living on wages in lumber camps,” he said.

Although Ramp Hollow does not delve into the current state of Appalachia, Stoll said that it might interest those living there. It’s common to find residents who take pride in playing a part in America’s energy independence, but yet dismiss black lung disease and disasters like the 2010 Upper Big Branch mine explosion as a necessary and noble sacrifices.

“I’m not trying to embarrass anybody, but I want to present to them their own history in a way that is much more truthful than what they might have heard elsewhere,” Stoll said. “They were taken advantage of by government and by capital, and the two cooperated to dispossess them for the most selfish of possible reasons.”