skip to main content
Return to Fordham University
You are at:Home»Inside Fordham»Faculty Reads»New Book Captures Spirit of the Bronx at its Best 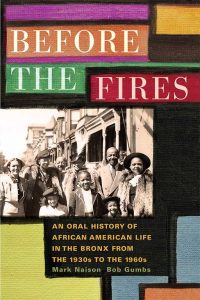 The publication this week of Before the Fires: An Oral History of African American Life in the Bronx from the 1930s to the 1960s (Fordham University Press, 2016), brings to fruition a project that began 14 years ago with interviews of South Bronx residents about life in the borough before the dramatic declines of the 1970s.

The book, co-edited by Mark Naison, PhD, professor of African and African American studies, and Bronx resident Bob Gumbs, features 17 edited and condensed interviews that were chosen from among 300 conducted as part of the Bronx African American History Project.

Naison said he and Gumbs managed to cull from the 300 interviews the ones that feature the best storytellers.

“If you’re going to have an oral history, you want something told in a way that’s going to capture people’s attention,” he said. 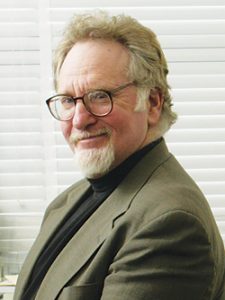 Taken as a whole, said Naision, the stories counter perceptions of the Bronx’s past as a hellish, fire-ridden borough overcome with drugs, crime, violence, and family decay. He said the interviews also form a blueprint for a successful community that’s marked in particular by decent housing, good schools, and an unusual openness (for the times) to racial integration, as black families moved to the area from Harlem.

All but one of the interview subjects came from parents with no college education, and yet they went on to become principals, teachers, social workers, architects, world class musicians, and ministers, he said.

“We’re definitely trying to get across that a community is families, schools, churches, community groups, and everybody working together, with the interest of young people foremost,” he said.

“The schools had much better arts and sports programs, the after school programs stayed open until nine at night, and there were community programs in the churches and the housing projects. I think we’ve gotten away from those things we used to provide to youth.”

Naision said the words of the late African-American historian Vincent Harding resonates deeply and thematically in the book. Harding talks about how, growing up in a single parent family, what nurtured him and helped him succeed were the members of a small, all-black congregation at a church he attended, and the teachers who took him under their wings at his large, multiracial school.

“Where does success come from? There are definite things that we can learn from these stories about what it takes to help young people who grew up in difficult circumstances to succeed,” Naison said.

Naison said it’s most gratifying to him that area high school teachers are going to use Before the Fires in their lessons about Bronx and urban African-American history.

“We hope people discuss it and debate it . . .  and that the material itself is exciting enough to engage them,” he said.

“I’m excited that it’s going to be used in schools,” he said. “A high school class might draw something entirely different from what a college class might.”