Jocelyn Wogan-Browne, Ph.D., a medieval literature scholar whose work has focused on the use of vernacular language and women’s narratives in medieval texts, was installed on Oct. 13 as the Thomas F.X. and Theresa Mullarkey Chair in Literature. 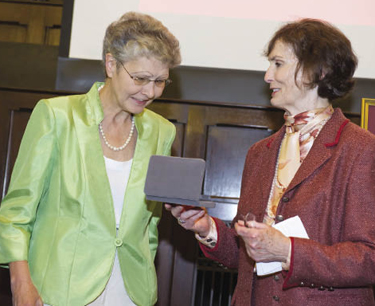 Thomas Mullarkey (FCRH ’54, LAW ’59) and his wife, Theresa, endowed the chair in 1987. It is a testament to Thomas Mullarkey’s love of—and vision for—the University that he attended and served, Theresa Mullarkey said.

“Tom was definitely the product of a Jesuit education,” Theresa Mullarkey told an audience that filled Tognino Hall. “When he arrived at Fordham, he’d planned to major in business. But an elderly Jesuit looked at his transcript and said, ‘Sonny, you need to be a liberal arts major—it will broaden your perspective.’”

Mullarkey said that her husband decided to become an English major, and that he made use of his writing skills later as an intelligence officer in the Army in Korea and then as a lawyer.

“He wanted to endow the chair because he knew the importance of the liberal arts,” she said.

Wogan-Browne, who came to Fordham from the University of York and is internationally recognized as a medieval virginities scholar, thanked the Mullarkey family for giving her a chance to experience the “intellectual freedom of Fordham’s Jesuit tradition.”

“[Their] endowment constitutes a statement about the value of liberal studies and a commitment to humanities disciplines,” she said, accepting the chair medal from her benefactor. “It’s a continually inspiring gift.”

Wogan-Browne delivered an inaugural lecture, “Blood Matters: Reading with the Heart in English Devotional Poetry,” which explored the relationship of medieval women to passion meditations—historically attributed to male Christian writers such as St. Anselm of Canterbury.

Women, Wogan-Browne said, actually played a large role in the creation of these meditations, not only in their patronage, but also by becoming “Brides of Christ” as nuns or in an honorary way as widows.

She said she discovered the critical role of these women by studying literary histories often overlooked by scholars of medieval work because they were written not in Latin but in the French vernacular.

One such work, said Wogan-Browne, was a 13th-century devotional poem written in French for Eleanor of Provence, the highly successful medieval queen of King Henry III, patron of the arts, and, eventually, a widowed “Bride of Christ.”

The poem Rossignos (Nightingale) is a rich narrative of Christ’s passion and the Virgin Mary’s role in Christian thought with decidedly female—and powerful—devotional sensuousness and symbolism, said Wogan-Browne. Thus, a bleeding Christ is a bush blooming with roses; the scent of a believer’s heart is inhaled by God, whose exhale, like blood, fills its chamber and unites the corporeal and the cosmic.

Reciting passages of the 5,000-line poem in medieval French, Wogan-Browne illustrated her belief that multilingualism broadens diversity within languages. In Eleanor’s England, she said, English, Latin and French all cross-fertilized each other.

“I use this passion meditation to emblematize the importance of our multilingual tradition,” she concluded. “A monolingual tradition not only erases the multiculturalism of both past and present: it is totally spurious, and flies in the face of everything we know of how human language actually behaves.

“So the work of rendering the past of English cultural narratives as the properly diverse, multilingual and inclusive past it is, seems to me worth doing in our own particular moment.”

Joseph M. McShane, S.J., president of Fordham, praised Wogan-Browne for her groundbreaking scholarship and referred to the Mullarkey family as “most generous benefactors.”

“Thomas and Theresa, both are great saints,” he said.