skip to main content
Return to Fordham University
You are at:Home»Inside Fordham»Molecular Biologist Explores the Complex Genetics of Fruit Flies 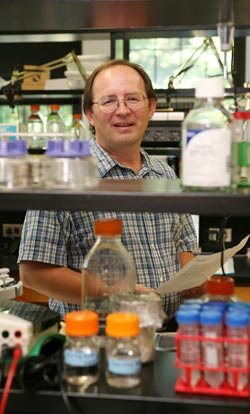 Edward Dubrovsky, Ph.D., is seeking to understand the complex processes that regulate the growth and development of fruit flies.
Photo by Michael Dames

Drosophila melanogaster is a remarkable little fruit fly. Sleek and compact, it sports transverse black rings across its abdomen, crimson eyes that look like fluorescent goggles and a pair of wings capable of flapping up to 220 times per second. To the uninitiated, it’s nothing more than an insect, but to scientists the fruit fly is a marvel of genetics and developmental biology, one of the most—if not the most—studied organisms in all of biological research.

Thus, it will come as no surprise that Fordham University molecular biologist Edward Dubrovsky, Ph.D., has spent much of his professional life delving deep into the fruit fly’s hormonal makeup and genetic regulatory network.

“My interest in Drosophila started very early,” said Dubrovsky, who joined the Department of Biological Sciences in the fall of 2006 after 11 years at Dartmouth College. “For as long as I have been in research, I have worked on Drosophila. The first lab I joined as an undergraduate back in Russia was doing a cytogenetic study of hormonal action in Drosophila. It’s been a fascination ever since.”

In fact, Drosophila has been drawing the attention of developmental biologists for decades and a lot of it has to do with its life cycle. Fruit flies undergo a metamorphosis, from larva to pupa to a flying insect.

Scientists have been seeking for years to crack the code as it relates to the molecular and genetic mechanisms that control metamorphosis. Getting at answers hasn’t been easy, but Dubrovsky said it appears to be all about the hormones, two in particular: ecdysone and juvenile hormone (JH).

Hormones are essentially the signal corps of the biological world. When it’s time for the next stage of a budding fruit fly’s development, hormones are first synthesized in endocrine organs and then shipped off to the rest of the body to interact with their targets.

Ecdysone and juvenile hormone appear to work in tandem.

“Through the studies of many research labs, we have come to the understanding that when ecdysone spikes with high levels of JH in the background, the insect’s cells take this to mean that it’s time to molt and to move from one larval stage to another,” Dubrovsky said. “However, when ecdysone peaks and the level of JH drops, that’s the cue for the last major transitional phase from larva to pupa.”

Much is known about the inner workings, the molecular mechanics, of ecdysone action. JH, in contrast, is the Wild West with vast unexplored regions.

Dubrovsky and his colleagues have managed to identify E75A as one of the trigger mechanisms in JH action. E75A is known as a nuclear receptor, one of a number of molecules that bind with hormones to carry the signals to a cell nucleus.

The process is more involved than simply E75A. There is likely a regulatory network of transcription factors, dominoes that have to topple in order for the hormonal signal to produce an effect. But it was an important finding nonetheless. In isolating E75A, Dubrovsky and his colleagues had planted a flag in what had been uncharted terrain, illuminating—if faintly—the shrouded series of events that eventually leads to a fruit fly breaking through its protective pupa and fluttering away to set in motion the arc of life once more.

And it was an especially significant discovery because E75A had until then been known as a transcription factor activated by ecdysone. That meant that Dubrovsky and his colleagues had not only discovered a link in the chain of reactions in JH gene expression, but one that could be triggered by both hormones.

“We had the molecule that appeared to be at the crossroads of the regulatory interplay between ecdysone and JH,” Dubrovsky said. “This is what was intriguing to me. Of course, the collaborative action of ecdysone and JH during development has been well documented, but finding the E75A protein gave us the possibility to come up with a model of how JH might actually affect ecdysone-initiated transition from larva to pupa.”

In order to fully develop that model, the field will have to produce more hard science on JH. So the race is on to reveal the complete regulatory network of transcription factors involved in the “cross-talk” between the two hormones and eventually find JH’s receptors.

For his part, Dubrovsky has a National Science Foundation grant to look for those elusive receptors. At his Fordham lab, he is using a powerful technique, known as RNAi, to test all known Drosophila nuclear receptors for their ability to mediate the JH signal. Dubrovsky also plans to employ a process known as DNA microarray to identify JH responsive genes in a whole Drosophila genome.

The potential to finally pry the door open on some of the fruit fly’s greatest developmental secrets is to Dubrovsky exciting both personally and on the basis of pure science. He tries never to lose sight, however, of the human implications of such research. Insects represent the largest, most diverse group of animals on the planet. Some of those insects are human disease vectors, carrying malaria, encephalitis and dengue fever.

Insect management programs have historically been effective. However, many insecticides, Dubrovsky said, are so damaging to the environment that they are banned in the United States and Europe. But in places like Africa, the threat of malaria and other dread diseases put people in the untenable position of having to choose between either harming the environment or ridding themselves of a threat to their lives.

Given that JH is able to regulate insect growth and because it is not found in animals other than insects, Dubrovsky said that the hormone has great potential as an environment-friendly pesticide.

“What our research gives you is a better understanding of how insects develop and grow,” he said. “New ideas for the development of innovative and more powerful JH-based strategies for pest control will come from a complete understanding of the molecular aspects of JH action. Only then can you work with chemists and biologists to develop those new weapons that will fight these pests and not harm the environment.”