One might not normally associate postwar Beirut with postindustrial Soho, but for associate professor
Aseel Sawalha, Ph.D., it’s not that much of a leap. Sawalha’s anthropology deals in the recent past with a focus on reclaimed neighborhoods. 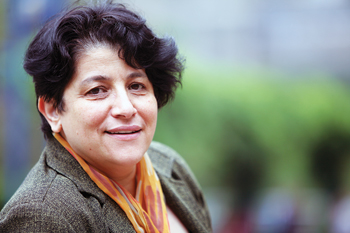 Aseel Sawalha, Ph.D., studies urban placemaking in disparate neighborhoods, both here and in the Middle East.
Photo by Tom Stoelker

Whether abandoned because of a sluggish economy or violent warfare, the spaces she studies are eventually redefined and revitalized by artists and/or activists. At the heart of her work lies a tension between neighborhood stakeholders and corporate interests.

Sawalha said she chose to begin her research in Beirut because of its cosmopolitan nature and its willingness to accept strangers.

“You go to Beirut to live your dreams,” said Sawalha, who did two years of fieldwork there.

In post-war Beirut, Sawalha was able to study the nature of placemaking in an urban environment that was akin to a blank slate. Much of the research appeared in her book Reconstructing Beirut(University of Texas Press, 2010).

Under a 10-year redevelopment effort led by the late Prime Minister Rafik al-Hariri, the government hired a private real estate company that he had ties to, an arrangement that Sawalha understatedly described as “strange.”

“They basically demolished all the buildings that were not demolished by the war,” she said.

The demolition of the remaining historic buildings and the redevelopment of Beirut’s Martyrs Square spurred heated debate. Despite religious and other differences, coalitions formed to save the local history. But just what history was worthy to save remained a nebulous question.

“What kind of history did they want to commemorate,” Sawalha asked rhetorically. “French Colonial? Phoenician? Ottoman?”

The newly built downtown area is dotted with boutiques and cafés, such as Harrods and Hard Rock Café, venues out of reach of the ordinary resident.

Before Sawalha left Beirut for New York to finish her dissertation, she selected a neighborhood adjacent to the downtown central district for further study upon her return.

“I chose [it]to see how the reconstructing was affecting the lives of the people,” she said. “But when I came back six months later the neighborhood was gone.”

In its place, she said, were gleaming condos. But Sawalha said that knee-jerk reaction of blaming Western influence was an oversimplification. The building boom was rooted in what she called neoliberal transnational capitalism promoted by a new Lebanese elite who profited from the war economy.

“The corporate world, which is beyond the nation-state, was intervening,” said Sawalha. “The new economic elite, the war elite—people who made money from selling weapons—they wanted this.”

After the 2005 assassination of al-Hariri (on the edge of the downtown he rebuilt), downtown Beirut once again became the stage where opposing factions—many from non-elite groups—took to the streets.

The symbolic significance of the center was reclaimed. Martyrs Square was redubbed Freedom Square and the constant presence of crowds forced the tonier businesses to adapt or shut down. Sawalha said that by physically inserting themselves into the city center, protesters were indirectly protesting their exclusion from plans for the new city.

Sawalha’s latest work focuses on another group that reclaimed an abandoned and desolate urban core: the women artists of New York’s Soho.

However, the outcome for that area, though still playing out, acts as counterpoint to the protesters’ reclamation of downtown Beirut.

Well before Chanel and Prada arrived in Soho, the area was known as the Cast Iron District. The buildings, with their cast iron facades, were intended for industrial use at the turn of the last century. By the 1970s, manufacturing had largely abandoned New York, and the Cast Iron District sat empty, until artists squatted in old buildings and began making art.

Though the story of the homesteaders is well known, the story of the women who settled there has been largely ignored, said Sawalha. In her current research, she tackles the subject one interview at a time in a cohort that is largely overlooked by anthropologists—middle-class white women.

As baby boomers, the women were brought up to be housewives. Parents paying for an arts education expected their daughters to gain sparkling cocktail conversation in the vein of Jackie Kennedy, not to become artists living in abandoned factories.

The Soho work led to further investigation into women and the arts in Amman, Jordan. After the U.S. invasion of Iraq, thousands of Iraqis found refuge in neighboring Amman. Among the refugees are well-established artists, now represented by middle- and upper-class women who are reshaping the cultural landscape of that city. More than 20 art galleries have opened in the last 10 years.

The research in both New York and Amman challenges the stereotypes of the “vulnerable,” “oppressed” woman by looking at women as artists, producers of knowledge, and distributors of high culture. In Amman, the women went from being refugees to curators. In New York, women artists shifted from being squatters to citizen activists as they took to the courts to protect their homes when Soho became gentrified.

But, unlike in Beirut, in Soho most of the middle class did not come back.