With the trees bare of leaves and Thanksgiving behind us, it’s time to turn the page on the sports seasons from fall to winter. But before we do, here’s a quick wrap-up of the fall season. 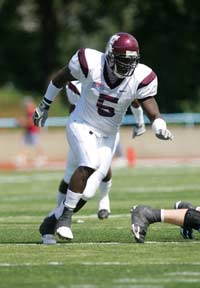 Women’s Soccer
The Fordham Rams defeated La Salle (3-2) and Charlotte (2-1) in the first two days of competition to advance to the 2006 Atlantic 10 Women’s Soccer championship game for the first time in school history. Unfortunately, the Rams fell to the host team, Saint Louis, 2-1, in the final. Elisabeth Roald, Alexis Ribadeneyra, and Catherine Huvane were named to the Atlantic 10 All-Championship team as the team finished with a 14-7 record, the most wins in school history.

The Rams closed out 2006 with a 3-9 record, capping the season with a 38-30 win over Georgetown. Three Rams were honored by the Patriot League upon the conclusion of the campaign, with Marcus Taylor named the 2006 Defensive Player of the Year and junior punter Benjamin Dato and senior defensive lineman Jay Edwards earning First- and Second-Team All-League honors, respectively.

Volleyball
The Fordham Volleyball Rams closed out the season with a seven-game winning streak, which propelled them into the Atlantic 10 Championships for the first time in school history. But the Rams’ stay at the championships was short, as they fell to eventual tournament winners, Saint Louis, 3-0. The Rams had four players receive postseason awards: seniors Tasha Johnston and Marija Markovic were selected Second-Team All-Atlantic 10, while seniors Jamee Stimson and Kealia Ieremia were named Honorable Mention by the conference.

Water Polo
The polo Rams closed out the season with an 11-11-1 record, the first season of .500 or better since the mid-1980s, and finished in fifth place at the Northern Division Championships. Sophomore Todd Conway was named First Team All-Conference by the Collegiate Water Polo Association. This is the second straight season a Fordham water polo player has been honored, as Paul Shrewsbury garnered Second Team honors last season 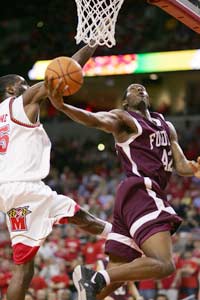 Bryant Dunston (right) scored a game-high 21 points against the University of Pennsylvania on Dec. 9 in Philadelphia, in which the Rams beat Penn 77- 60.
Photo by Vincent Dusovic

After a season-opening win over Sacred Heart, the Rams traveled to Nashville, Tennessee to participate in the 2006 Preseason NIT. The Rams opened the tournament by giving 25th-ranked Tennessee all they could handle, valiantly falling to the Vols, 78-71. Fordham then dropped the regional consolation game to Belmont, 56-49. After a 12-day layoff, the Rams came back to defeat St. Francis at home, 76-49.

Swimming
The Fordham women’s swimming squad is off to a 5-1 start while the men stand at 3-3. The women have also been busy setting school records, the latest coming in the Rhode Island/Duquesne tri-meet on Nov. 18 when freshmen Caitlin Napoli set two new standards. She started the day by breaking Fordham’s 200-yard freestyle record with a time of 1:52.97, besting Katie Greiner’s record of 1:53.84 (set in 2004). Napoli then broke her own 200-yard butterfly record with a 2:04.60 clocking, besting her own mark of 2:06.05 set earlier this year.