The Fordham men’s and women’s soccer programs were well represented on their respective Atlantic 10 All-Conference teams this fall, with four men and 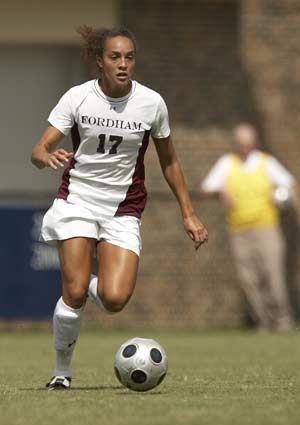 On the men’s side, senior John Pardini was named First Team All-Conference, while three freshmen,Matt Courtenay, Aaron Markowitzand Ryan Meara, were named to the All-Rookie Team.

Bustos is the first Fordham women’s soccer player to earn a major Atlantic 10 award, and the third Fordham defender to earn First Team All-Atlantic 10 honors, joining Kara Coniker in 2000 and Corey Dunfey in 2003. She started all 18 contests this season and anchored a defensive unit that registered seven shutouts, including five in league play, and limited 12 opponents to one goal or less.

Boulos, a Second Team selection last season, had an outstanding senior campaign, leading the Rams in goals (10), points (23) and game-winning goals (5). A two-time Atlantic 10 Player of the Week, seven of Boulos’ 10 goals came in conference play, while overall she became the seventh Ram to have double-digit goals in a season.

Pardini, who was shortlisted for the Hermann Trophy at the beginning of the season, anchored the Fordham men’s squad, playing both as a back and a forward. He started all 18 games this fall, scoring two goals and adding a team-high five assists for nine points. As a defender, Pardini helped Fordham record eight shutouts, as opponents averaged less than one goal per game against the Rams in 2008.