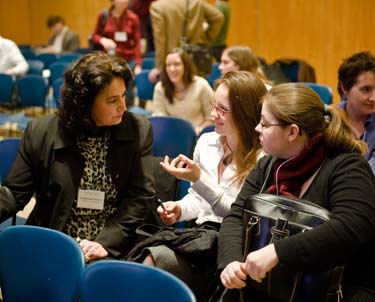 Lorraine K. Stock, Ph.D., of the University of Houston, speaks to students during the 28th Annual Conference of the Center for Medieval Studies.
Photo by Ryan Brenizer

Was Saladin a merciless savage or a just and wise ruler? Was Richard the Lionheart noble? Demented? Gay?

It depends on which movie you’re watching, according to Lorraine K. Stock, Ph.D., a University of Houston professor of medieval literature who spoke recently at a gathering of medievalist scholars at Fordham’s Lincoln Center campus.

Stock’s lively and provocative talk on Hollywood’s view of the Crusades was a highlight of “Remembering the Crusades: Myth, Image and Identity,” the 28th Annual Conference of the Center for Medieval Studies.

The conference that ran from March 28 to 29 attracted an international array of medievalists who gave presentations on topics ranging from the recondite—a discussion of the meaning and significance of “voussoirs,” the distinctive stone arches in certain medieval French cathedrals—to issues touching on current events, including a talk on arguments among Sunni and Shi’a historians over the memory of Saladin, the great 12th century Muslim military leader.

Organized by the center’s director, Maryanne Kowaleski, Ph.D., the conference featured some of the world’s leading medieval scholars, including Jonathan Riley-Smith, Ph.D., of the University of Cambridge, who spoke on “Aspects of Hospitaller and Templar Memory,” about the famed military and religious order.

Theresa M. Vann, Ph.D., of Hill Museum and Manuscript Library, gave a talk titled, “Our Father Has Won a Great Victory: Dispatches from the Battlefield of Las Navas de Tolosa,” a key 13th century battle between Muslims and Christians in Spain.

Iain Macleod Higgins, Ph.D., of the University of Victoria, gave a talk titled “Crusading against the Anglo-Saracens: Richard Holland’s ‘Buke of the Howlat’ (c. 1450),” a poem by the 15th century Scottish author.

But Stock’s talk certainly was among the most entertaining. Titled “And Now Starring in the Third Crusade: Depictions of Richard I and Saladin in Films and Television Series,” it was interspersed with clips of films depicting the crusades, most recreating the dramatic rivalry between Richard and Saladin. Stock described how 20th century filmmakers and other dramatists viewed the 12th century holy war through the prism of their own times. While the productions occasionally included historically accurate details, Stock said they reveal far more about the periods in which they were made than about the crusades.

“American, British and international filmmakers often reinterpret the medieval crusades as distant mirrors, using [historian and author]Barbara Tuchman’s term, of not only medieval history and myth,” Stock said, “but more importantly, contemporary political events and especially wars, current or just previous to the production of the film or TV series, as well as 20th century issues of sexuality and gender construction.”

The speculation about Richard’s sexuality, for instance, was prompted by the 1922 film Robin Hood, starring Douglas Fairbanks in the title role. It ends with Richard banging on wedding-chamber door of Robin Hood and Maid Marian, “trying to keep them from doing, whatever,” Stock wryly noted, to laughter in the lecture hall.

The 1935 classic, The Crusades, directed by Cecil B. DeMille, reflected America’s isolationist mood during the period and included repeated references to the word “peace.” By contrast, the 1954 epic,King Richard and the Crusades, starring a brown-faced Rex Harrison as Saladin, was among the mid-20th century films that recalled the recently ended world war, she said.

Crusade-based films continued to hue closely to contemporaneous perspectives almost to this day. Saladin, for instance, a 1963 film by Egyptian director Youssef Chahine, shows the holy wars entirely from the Muslim perspective, offering a “wonderful antidote” to the earlier Western-centric depictions, Stock said.

Meanwhile, the dark and brooding Robin and Marian (1976) starring Sean Connery and featuring Richard Harris as a demented King Richard, reflected the post-Vietnam mood of the United States and its dim view of that war’s military leaders.

Particularly striking about Stock’s talk was the sheer volume of dramatic depictions of the Crusades, nearly 20 major films in all. Her favorite? Ridley Scott’s Kingdom of Heaven (2005) for its balanced portrayal of Saladin. She recommends the director’s cut.