skip to main content
Return to Fordham University
You are at:Home»Faculty Profiles»Medieval Muslim Motherhood and its Bearing on Identity 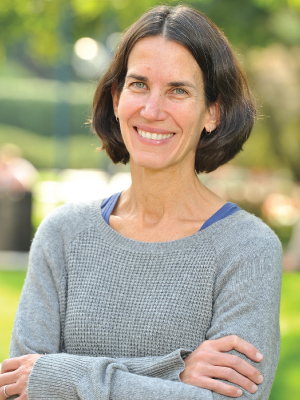 Kathryn Kueny’s latest book examines how maternity is understood in medieval Islam, and how such understanding bears on female gender identity.
Photo by Dana Maxson

Modern discourse often casts science and religion as bitter enemies. But if you were to rewind roughly 12 centuries, you would find at least one worldview in which the two domains were considered symbiotic.

The research of Kathryn Kueny, Ph.D., targets this historic junction. An expert in medieval Islamic studies, Kueny says that even when Islamic theology and the science of the day did not agree, the pursuit of each was nonetheless a sacred endeavor.

“In the medieval period, there was the belief that by discovering how the world works, you are discovering more about God,” said Kueny, an associate professor of theology. “So the two paths were not incompatible. They were encouraged.”

In her latest book, Conceiving Identities: Maternity in Medieval Muslim Discourse and Practice (SUNY Press, 2013), which comes out this month, Kueny examines the interplay of science and religion vis-à-vis reproduction and motherhood.
In her book, Kueny analyzes a variety of medieval texts, ranging from religious to medical, legal, and even zoological records. Culling information from several genres helped her to paint a larger picture of how the Muslim world of the 7th through 12th centuries understood the process of conception—scientifically as well as theologically.

“In the Islamic tradition, people believe that God is completely in charge of everything—when life begins and ends, who’s a mother and not a mother, when wombs are prolific,” Kueny said. “But there is also a scientific side to the tradition that explains why these things happen.” 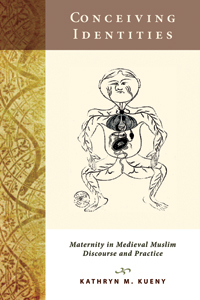 Borrowing primarily from the ancient Greek physician Hippocrates, Muslim physicians put forth a number of theories about how conception and pregnancy occurred, and what could be done to ensure their success. Salient factors included the mother’s diet, her physical activity, and the health of her womb. However, the father could also aid the process—for instance, by eating more dates or by holding more positive thoughts.

Alongside the biology of conception, Islamic scholars bore in mind that reproduction held deep theological significance for the tradition.

“Motherhood is central to Islam, and the family is generally considered as the cornerstone of the faith,” she said. “The Qur’an talks quite a bit about God creating life in wombs and delivering life from the womb. So God is at times portrayed as a kind of midwife figure, and is oftentimes equated with the womb itself.”

Reproduction and chldbearing are ultimately meant for building family and community, which are paramount in the tradition—even its most important prophet, Mohammed, was a husband and father to many. As the agents of this sacred calling, women’s very identity as Muslims came to be linked to maternity.

“Mothers are construed as these ideal figures,” she said. “Prolific wombs are oftentimes associated with a very pronounced, steadfast faith. So if you’re unsuccessful in bearing a child, that may mean that there’s something problematic about your faith, too.”

By reading more deeply into the texts (which were all written by men), however, and taking note of the ritual practices involving maternity, Kueny found that medieval Muslim women nevertheless wielded a certain pragmatism when it came to their maternal duties. In this way, women were able to quietly reclaim authority over their identities, and at times even displayed efforts “to manipulate their reproductive systems.”

For instance, women used folk medicine, such as magic potions, to assist or prevent conception, to ensure a safe delivery, or to attempt to conceive a child of a particular sex. There existed prescriptions for abortifacients—a practice that was not considered egregious, Kueny said, because many medieval Islamic scholars locate the beginning of human life at four months, the point at which the mother begins to feel a fetus moving.

The belief is that “at four months, the fetus is ensouled, God breathes life into it, at which point it becomes a human,” Kueny said.

Although science has since caught up to how conception works, and there is greater societal understanding of how motherhood bears on female identity, the ultimate meaning of motherhood remains central in Islam.

“God wants you to procreate—to get married and have children and love your family, to have wealth, to have nice things. It is about cultivating piety and disciplining yourself within that context,” she said.

This spring, Kueny will be teaching “Sacred Texts of the Mideast,” a unique service-learning course designed to promote interreligious experience. For example, Christian students may do service for Muslim organizations, or Jewish students may serve Christian organizations.
“It’s an experiential course. Students will not only do service, but will also learn about how other traditions envision care for others.”