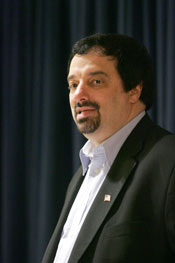 Media watchdog David Honig says the FCC has an historic resistance to granting licenses to minorities and is burdened by institutional cronyism.
Photo by Bruce Gilbert

The lack of minority representation in both television and radio stems from decades of misguided decisions from the Federal Communications Commission (FCC), said David Honig, executive director of the Washington, D.C.-based Minority Media and Telecommunications Council, in a speech in Flom Auditorium on Oct. 5.

Honig characterized the FCC as an agency that has favored racism and cronyism over competence when it came to issuing broadcast licenses. “In the close-knit club of communications policymaking, what would it take for a commissioner to confront someone who mentored him, who may have gotten him his job?” asked Honig.

“Broadcasting drives our culture,” said Honig. “Diversity in broadcasting is desirable not because it promotes competition… but rather because segregation [of any form]is uncivilized and morally wrong.”

Honig said that minorities have not had a hard time making their voices heard in print media, noting that in 1956 there were more than 250 African-American-owned newspapers, and nearly 100 Hispanic-owned weekly newspapers in the U.S. At the same time, however, there was just one radio station owned by people of color. “The FCC acted as a gatekeeper to prevent people of color from gaining a foothold,” he said.

He discussed ways that the FCC has hindered minority development in the broadcast media, among which were ignoring applications for licenses and using discriminatory laws to decide who could receive them. More recently, according to Honig, the agency has changed ownership rules, making it more difficult for minorities to acquire broadcast outlets.

Honig said that the lack of diversity in broadcasting has soured minorities on the media, citing recent studies that show while African American and Hispanic teenagers watch more television than their white counterparts, they tend to have less respect for the First Amendment and less tolerance for unpopular opinions.

Honig urged the FCC to change its ways. “Radio and television could be the ultimate tools of bridge building, participation in democracy and freedom of expression,” he said.