skip to main content
Return to Fordham University
You are at:Home»Faculty Profiles»Media Scholar Casts a Wary Eye on Technology

Modern communications technology has made it possible for Americans to stay in touch with friends,
relatives and co-workers—24 hours a day, seven days a week. 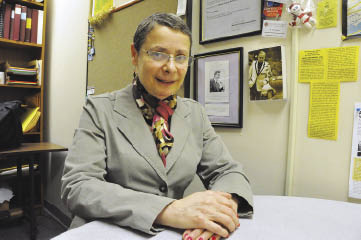 That might not be such a good thing, said Janet Sternberg, Ph.D.

Sternberg, an assistant professor of communication and media studies, is an avowed questioner of technology. She is more skeptic than Luddite though, and insists that ceaseless cheerleading for technology must be tempered with an analysis of its unintended effects on culture.

“I love technology. I have a new brand-name computer in my office, but I actually bring in my own open-source laptop because I’m a geek. I’ve owned a computer since 1984, and my own digital habits have been established for decades,” she said.

Sternberg recently returned from a yearlong faculty fellowship, which she used to conduct research for her forthcoming book, Mediating Ourselves to Death: Unexpected Consequences of Communication Technology in the Digital Media Age.

The title is a nod to her mentor, media theorist Neil Postman, who wrote the seminal critique of television, Amusing Ourselves to Death: Public Discourse in the Age of Show Business (Penguin, 1985). As his assistant, Sternberg typed Technopoly: The Surrender of Culture to Technology (Knopf, 1992), in which Postman argued that technology was monopolizing culture. Sternberg doesn’t say that culture exclusively serves technology, but she does think society is dangerously close to Postman’s vision.

“In a culture that celebrates and venerates technology, all we have are cheerleaders. That’s who we hear from most often, especially since the people selling the technology are cheering the loudest,” she said.

“When you get an e-mail, and you automatically think, ‘I have to answer this now,’ like Pavlov’s dog, the technology is in charge. When people caress their digital devices all the time, almost obsessively, the way some people used to caress their cigarettes, there’s more going on than simply staying connected,” she said.

“People are starting to realize that when we’re connected all the time, there’s a downside.”

Sternberg speaks from experience. Her doctoral dissertation, Misbehavior in Cyber Places: The Regulation of Online Conduct in Virtual Communities on the Internet, which will be published soon in book form, was born of her self-described addiction to chat rooms.

“I’ve refrained from using blogs, Twitter or Facebook—not because I don’t know what they do, but because I know very well what they do and what they undo, and I know that I’m vulnerable to the seductiveness of being ‘always connected to everyone,’” she said. “I used to chat with 20 people at the same time, so if I were to start tweeting or blogging, I’d have to stop doing other things.”

The role of technology as it relates to education is a major part of what Sternberg studies. When undergraduates crowd into her class on digital media and cyberculture, they become knowledgeable about the topics—and themselves the subjects—of her lectures.

For example, Sternberg has noticed that mobile technology has altered students’ behavior in the minutes before class begins. In the past, when she arrived early to make herself available for unscripted schmoozing, students would approach her. But now, so many are preoccupied with laptops and smart phones, “it feels like an imposition to ask for their attention before class officially starts,” she said.

The role that devices play in distracting people is interesting, but Sternberg is more interested in technology’s subtle effects. For instance, if a student sits in the front row with a laptop that everyone behind the student can see, the entire classroom is affected—not just the computer’s owner.

Taking the subject a bit further, Sternberg questioned her students over who is responsible for ensuring that they are not viewing inappropriate material—such as pornography—during class.

“So what do we do? Lock down the classroom? Turn it into a police state?” she asked. “Or do we try to raise people’s consciousness? That’s where I’m at.”