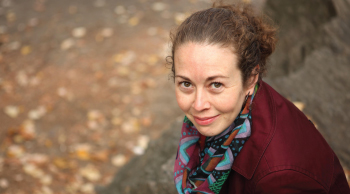 Christine Breiner hopes to use funding to foster community among mathematicians, whose work is often abstract and isolated.
Photo by Tom Stoelker

The Kenyon mathematics community was small but close knit, and those years helped Breiner understand the importance of finding, connecting with, and communicating with like-minded mathematicians.

This past August, the challenge of connecting was made significantly easier when Breiner was awarded a competitive $116,655 research grant from the National Science Foundation. The majority of the grant money is earmarked for travel. As Breiner attends math conferences and collaborates with researchers from Germany to California, the funds should be put to good use.

“In the math world, if you want to talk with someone who is working on the same problems as you are, you have to go to math conferences,” said Breiner. This past summer, she used previously awarded grant money to participate in a research program in Utah and a conference at a mathematics institute in Oberwolfach, Germany. Both programs gathered many of the best and brightest in geometric analysis and differential equations—her chosen fields—from around the world.

The funds will also prove useful closer to home. As she is one of three new faculty in Fordham’s mathematics department with an interest in geometric analysis, she and her colleagues have organized a seminar, to which they invite outside speakers who discuss their own ongoing projects. Even among experienced mathematicians such as these, Breiner said, background lessons are sometimes necessary in order to familiarize everyone with the language and techniques of a specific area. Through these discussions, Breiner and her colleagues have discovered mutual interest in particular problems that she expects will lead to fruitful collaborations.

From the broader area of geometric analysis, Breiner focuses on minimal and constant mean curvature surfaces. Such surfaces arise in nature as soap bubbles and soap films. Dipping a wire frame into soapy water, for example, produces precisely these types of surfaces.

To the uninitiated, Breiner delivers an explanation of geometric analysis in a paced and digestible manner. As she spent five years teaching math at a Baltimore high school for girls, she meets a listener’s confusion from the perspective of an experienced, effective teacher.

“You have to make a lot of judgment calls as a teacher,” she said. “You have to very quickly assess whether the students are getting something, you have to be able to adapt on the fly, and you need to pay attention to what they’re giving back to you.”

While teaching, however, Breiner realized she missed doing math. She decided to pursue math full-time at Johns Hopkins University, where she eventually earned her doctorate. Before coming to Fordham, she held postdoctoral positions at the Massachusetts Institute of Technology and Columbia University.

“What made it possible for me to go back was a realization that even if I messed up, there would still be so much more to learn,” said Breiner. “As an undergrad, I was scared of making mistakes, but if you’re really interested in pursuing math at any level, you should be prepared to make mistakes a lot—and only be right once in a while.”

The struggle to translate math-speak into the vernacular reiterates the importance of community to mathematicians, she said.

“There are people all over the world that are working on these problems,” she said. “In New York, we’re fortunate. We have all the CUNY schools, NYU, Columbia, and, of course, Fordham. So there are always seminars to attend.”

Meanwhile, the slog of the actual problem solving—and getting things wrong—seems to necessitate external support. Breiner admitted that it can be incredibly frustrating to spend months and sometimes years on a problem before realizing the strategy used to solve the problem will not work.

“In math, one must get past being wrong because it’s going to happen all the time. But even then, I love that there is always something else to work on and that there’s always more to figure out,” she said.