skip to main content
Return to Fordham University
You are at:Home»Inside Fordham»Math Just Another Language to Master for FCLC Senior 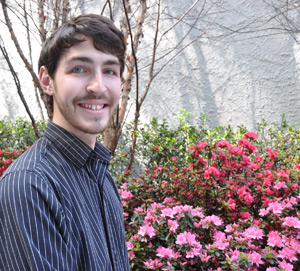 Peter Muller used philosophical and sociological ideas from French literary studies to examine a mathematical debate that occured in the 18th century.
Photo by Patrick Verel

Numbers and letters are remarkably similar to Peter Muller, a senior at Fordham College at Lincoln Center (FCLC). In fact, the native of Scotia, N.Y., is graduating with a dual major in math and French, two subjects that have more in common than some might suspect.

“If you ask most of my friends about math, it’s like learning another language to them because it involves different symbols and processes. It’s basically the same as learning another grammar and vocabulary,” he said.

“Both use analysis in one form or another, so you have to be creative in both of them,” he said.

The connections are so strong that Muller, who was a student ambassador at Lincoln Center, spent his final semester utilizing philosophical and sociological ideas from French literary studies to examine a mathematical debate that occurred in the 18th century. Although the debate took place between an Englishman and a German, it was conducted in French.

It is that kind of unique research that Muller plans to continue at Rensselaer Polytechnic Institute, where he will begin pursuing a doctoral degree.

Last summer, thanks to a National Science Foundation fellowship, he spent two months in Wyoming exploring the differences between discreet and continuous mathematics.

“The project mixed aspects of mathematical physics with graph theory,” he said.

In addition to playing soccer in an informal league in Queens, Muller found time during his four years to start a Lincoln Center-based Relay for Life fundraiser and accompanying student club.

Eventually, he is hoping to parlay his interest in applying math to real-world scenarios into work with a government agency. Fordham, he noted, gave him a good base from which to work.

“Caring for the whole person is clearly evident in everything they do,” he said. “Every office I deal with, they know my name and remember me even four years later. It’s great to have that experience. Plus, the encouragement to branch out into other disciplines is something I enjoy very much.”