skip to main content
Return to Fordham University
You are at:Home»Inside Fordham»Mary McAleese to Speak at 165th Commencement 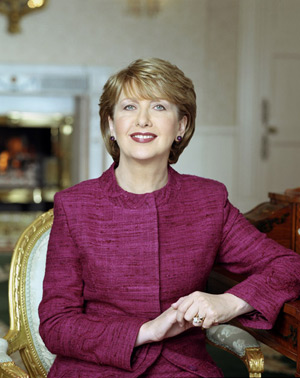 Mary McAleese, President of Ireland, will deliver Fordham University’s 165th commencement speech on May 22, and will receive an honorary doctorate of laws, the Office of the University President has announced.

“We are deeply honored to have President McAleese deliver the 165th Commencement address,” said Joseph M. McShane, S.J., president of Fordham. “In her leadership, integrity and scholarship, President McAleese is the model to which our graduates should aspire. We look forward to bringing her into the Fordham family.”

Born in Belfast, Mary McAleese was a barrister and law professor before becoming the second woman President of Ireland, a post she has held since 1997. In addition, she is the world’s first woman to succeed another woman as an elected head of state. Her birth in Belfast means she is the first President to have come from Northern Ireland, where she grew up through the sectarian strife known as “the Troubles.”

President McAleese is an experienced broadcaster, having worked as a current affairs journalist and presenter in radio and television with Radio Telefís Éireann. She has a longstanding interest in many issues concerned with justice, equality, social inclusion, anti-sectarianism and reconciliation.

She graduated with a degree in law from the Queen’s University of Belfast in 1973 and was called to the Northern Ireland Bar in 1974. The following year, she was appointed Reid Professor of Criminal Law, Criminology and Penology at Trinity College Dublin.

In 1987, she returned to Queen’s University, to become director of the Institute of Professional Legal Studies. Seven years later, she became the first female pro-vice chancellor at that university.

After ascending to the high post, President McAleese described the theme of her time in office as “building bridges.” She regularly visits Northern Ireland, where people from all sides of the community have welcomed her warmly.

President McAleese will receive a doctorate of laws, honoris causa, at the Rose Hill ceremony. Also being honored with that degree at the ceremony will beRichard Ravitch, lieutenant governor of the State of New York.

Three distinguished guests will receive a doctorate of humane letters, honoris causa, at the 2010 commencement. They include: Francis M. Campbell, the United Kingdom’s ambassador to the Holy See;Miguel Humberto Díaz, the

Richard Ravitch, lieutenant governor of the State of New York, was educated at Columbia College, and went on to graduate from Yale Law School. He began his career in the construction business, as a principal of HRH Construction Corporation. There he was responsible for supervising the development, financing and construction of more than 45,000 affordable housing units in New York, Washington, D.C., Puerto Rico and other locations.

President Lyndon Johnson appointed him to the U.S. Commission on Urban Problems in 1966. Later, he was the chairman of the New York State Urban Development Corporation under Governor Hugh Carey, and head of the Metropolitan Transportation Authority (MTA).
His overhaul of the MTA earned him the American Public Transit Association’s Individual of the Year Award in 1982. He went on to salvage the Bowery Savings Bank of New York in the mid-1980s, and was a labor negotiator for Major League Baseball. In 2000, he returned to his roots when he was appointed co-chair of the federal Millennial Housing Commission, charged with making recommendations to Congress regarding ways to increase affordable housing.

Francis M. Campbell, a native of Newry, County Down, in Northern Ireland, declares that he is both “British and Irish,” and that he will not “exaggerate one identity at the expense of the other.”

Growing up on a small farm, the violence of “the Troubles” and the shortage of work forced his father to leave home and find employment in the mines of Canada’s Northwest Territories. Campbell’s education was formed by Catholic priests: He attended Queen’s University, Belfast, and did postgraduate study at the Catholic University of Leuven, Belgium. A Thouron Award to attend the University of Pennsylvania put him on a career path: In 1997, he joined the United Kingdom’s Foreign and Commonwealth Office.

Campbell’s early diplomatic career was centered in New York and London, with posts at the European Commission, as part of its delegation to the United Nations, and the European Enlargement Unit of the Foreign and Commonwealth Office.

In 2005, he was named the United Kingdom’s ambassador to the Holy See, the first Roman Catholic to hold the position of emissary of the Court of Saint James since the Reformation, and the first British ambassador to be appointed by open competition.

Miguel Humberto Díaz, U.S. ambassador to the Holy See, promised to serve as a bridge builder and a leader, by listening to and learning from others.

Born in Havana, Cuba, he was raised in Florida and attended St. Thomas University, earning a bachelor’s degree. He followed that with a master’s degree and doctorate from the University of Notre Dame.

Díaz is a former professor of theology at St. John’s University and the College of Saint Benedict, both in Minnesota, and a prolific author. On Being Human: U.S. Hispanic and Rahnerian Perspectivesearned him the 2002 Book of the Year prize from the Hispanic Theological Initiative at Princeton Theological Seminary. He has served as a board member of the Catholic Theological Society of America and is a past president of the Academy of Catholic Hispanic Theologians of the United States.

President Barack Obama nominated him on May 7, 2009 to serve as ambassador to the Holy See. He is the first Hispanic to represent the United States at the Vatican.

Alfonso J. “Alfy” Fanjul Jr., the chairman and CEO of Fanjul Corp. and Florida Crystals Corporation, was educated by the De La Salle Brothers in his native Cuba. Fanjul then enrolled in Fordham’s College of Business Administration, earning a bachelor of science degree in management in 1959.

After Fidel Castro’s army overthrew the Batista government and the Castro regime took possession of Fanjul property in Cuba, the family launched new ventures in the U.S. Fanjul Corp., an agriculture, real estate, resort and energy company, has operations and holdings in North America, the Caribbean and Europe. Likewise, Florida Crystals Corporation produces sugar, rice and other agricultural products and generates renewable energy through the largest biomass power plant in North America.

In rebuilding his family’s fortunes, Fanjul did not forget the strife and upheaval of their departure from Cuba. He began “paying forward” to various causes and needy communities. Among other charitable interests, he is a co-founder of Mission International Rescue Charities in the Dominican Republic, a national trustee of the University of Miami and a member of the Florida Council of 100.

John K. Mara once told an interviewer after a Giants defeat, “The status quo is not acceptable”—evidence of a life lived with “one foot raised.” Since Mara joined the organization in 1991, the New York Giants have reached the playoffs eight times, won four NFC East titles and played in two Super Bowls, winning one.

Upon the passing of his father in 2005, Mara became the franchise’s president and chief executive officer. In addition to being responsible for the day-to-day operation of the team, he has been at the forefront of the planning and negotiations for the New Meadowlands Stadium.

A devoted member of his community, Mara is a member of the board of directors of Saint Vincent’s Hospital Westchester and the School of the Holy Child, both in Harrison, N.Y., and Boys Hope Girls Hope of New York. He has also been involved for many years in coaching youth basketball and baseball.

Robert M. Morgenthau was born in New York City, attended Deerfield Academy and received a bachelor’s degree from Amherst College. He enlisted in the U.S. Navy in 1940, rising to the rank of lieutenant commander.

After the war, he graduated from Yale Law School and joined a New York law firm. In 1961, he accepted an appointment from President Kennedy as U.S. attorney for the Southern District of New York, a position he would also hold in the Johnson administration. He resigned as U.S. attorney during the Nixon administration, and in 1974, he was elected district attorney of New York County. Morgenthau held the position for 35 years—an unprecedented period of service.

The cases he presided over are legendary. Decades before Enron, Morgenthau created the first securities-fraud bureau. He has also mentored a Who’s Who of assistant district attorneys, including Associate Justice Sonia Sotomayor. He even inspired the character of the first district attorney on television’s Law and Order. He has been a tireless and selfless advocate for the pursuit of justice.