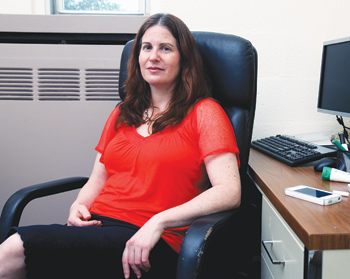 Orit Avashai is doing research on the marriage education movement, organized around the idea that couples can learn what works in a healthy relationship. Photo by Bruce Gilbert

Orit Avishai was well on her way to becoming a law professor when she found her true calling.

She was completing a master’s degree in law at Yale when she found herself increasingly intrigued by the untidy realities behind the legal concepts she was studying.

“I was interested in the on-the-ground, the messiness of how the world works,” she said.

In other words, she was meant to be a sociologist. She went west, to the University of California at Berkeley, earning two advanced degrees and delving deep into the topics of gender, religion, marriage and family.

Today, Avishai, Ph.D., assistant professor of sociology and anthropology, is exploring one of her deepest and most complex topics to date: the marriage education movement, a broad-based movement organized around the idea that maintaining a healthy marriage is a skill that can be taught.

“I’m really boiling it down. It’s a little more sophisticated than that,” she said. “But there’s this whole idea that if we could just get all this information to couples to let them know what works in relationships, what successful couples do … people will get married, they’ll stay married.”

The effectiveness of marriage education programs is debatable, however, and future federal support for them is contested and uncertain. Those are two aspects of the topic Avishai will examine over the next few years, along with the makeup and goals of the marriage education movement, as she works on a book project funded by grants from Fordham, the American Sociological Association, and the Lilly Endowment.

She began a sabbatical last year to delve into the topic, which grew out of her research into the rules surrounding marital sexuality among Orthodox Jews in Israel. She set out to study faith-based marriage education by visiting two Christian congregations in the New York area, but soon realized that the story was much bigger. Churches’ programs were framed by the larger marriage education movement, with its emphasis on skills like communication, problem solving and money management.

Since then, she has traveled to events all over the country—most recently, the conference for the National Association for Relationship and Marriage Education, held in Baltimore in July—to conduct a topology of the movement: its major players, its goals, its concerns, and its emerging ideas.

“There are hundreds of organizations that do this work,” she said. “They represent a broad swath of American society.

“Yes, there are a disproportionate number of people who come to this from a sort of faith perspective,” she said, but there are also many others—social service agencies, Head Start programs, therapists, pastors, and companies that develop marriage education curriculums. The U.S. Army has concerns as well, due to the strains that military life can place on couples.

What struck her, she said, was “the absence of direct politicization of this.”

“It’s not, ‘Let’s roll the world back to the 1950s,’” she said. At conferences, she noted the distinction between marriage education and marriage promotion—a term that “can sound very pejorative,” as someone at a conference pointed out, she said.

“If we’re talking about marriage promotion, then we might be promoting heterosexual marriage … as the ideal that everybody should strive for,” she said.

“If we’re talking about marriage education, it could just neutralize that,” she said, describing it as “taking couples who are together and want to be together and giving them better skills so that they can stay together.”

She has also noticed an inherent tension in the movement.

“Marriage education brings together two kinds of ideas,” she said. “One is a more cultural idea: marriage is sacred, marriage is important, it’s a core social institution. The other is from people who come at it more from a social welfare perspective” and promote marriage education because of the benefits for children, she said.

“The folks in the movement try to depoliticize it, and they do a fairly good job, in terms of the internal conversation. But the movement itself does not exist in a political vacuum.”

Marriage’s benefits for society are clear: “We know from demographic data that children who are raised in intact families do much better on a range of measures, from teenage pregnancy to incarceration to high school completion to college education to health.”

As she learns about the work of marriage educators “on the ground,” it’s clear that she is immersed in the kinds of nuanced, complex realities that first caught her attention when she was at Yale.

“I think that once you get into the field and talk with people and see what people are doing, what their motivations are, what their strategies are, where they want to go, you get a very different perspective on these big political debates.”