skip to main content
Return to Fordham University
You are at:Home»Faculty Profiles»Marking Theology Through the Emotional Landscape of a Painting

On the cover of Richard Viladesau’s new book is a richly detailed image of suffering. It is a painting of Christ on the cross—his body sagging, his head drooping, his hands and feet pinned to the cross with sharply rendered nails. 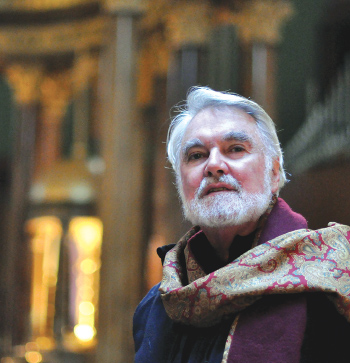 Father Richard Viladesau’s new book discusses Baroque-era depictions of Christ on the cross and the movement toward “extreme realism.”
Photo by Janet Sassi

“The Baroque era was special in that they paid more attention to human emotions, and were more adept at, more interested in, manipulating [that]emotion as a means of promoting spirituality,” said Father Viladesau, a Catholic priest and theology professor at Fordham.

His book is titled The Pathos of the Cross: The Passion of Christ in Theology and the Arts—The Baroque Era (Oxford University Press USA, 2014), and it’s the latest in his series about the interplay between theology and art throughout the ages, a topic that has absorbed him for years.

“It occurred to me very early that people often take their ideas from what they see rather than from abstract doctrine,” he said. “Iris Murdoch remarked that in religion it’s really the artists who have the last word and not the theologians. It’s common sense that people generally don’t study theology, but they see the pictures, and they hear the music, and that’s where they actually get their theology from.”

Before the Baroque era, it was more common for artists to emphasize the crucifixion as Christ’s triumph over sin and death, he said, giving the example of an El Greco painting that shows Christ alive on the cross—not suffering, but rather “giving himself over to the Father.”

A new theological strain came to the fore in the Baroque period, a tumultuous time when reform was in the air in both the Catholic and Protestant spheres. Preachers started to emphasize personal identification with the sacrifice of Christ on the cross and the sufferings of Mary, along with the idea that Jesus died for “‘me’—not just for humanity, but for ‘me,’” Father Viladesau said.

“There’s a lot of that—of the very personal identification with what Jesus has done for the individual,” he said. “There is a sense of gratitude and a sense of adoration” that artists conjured through pathos, he said.

This era was also the period of the passions of Johann Sebastian Bach, which were oratorios—or musical compositions—replete with pious and pietistic language, such as referring to Christ as “my dear loving savior,” he said. These oratorios took various forms; on the Catholic side, they depicted the disciples’ reactions to Jesus’s death on the cross and his resurrection.

In the visual arts, new oil-painting techniques allowed more precision and a whole new range of light and darkness, and artists began painting Christ with new tricks of light and “extreme realism.”

For instance, the Zurbarán painting on the cover of his book—titled The Crucified Christ—was positioned so the light in the painting looked as if it were coming from nearby windows, he said. It was displayed in the oratory attached to the sacristy of the Dominican friary of San Pablo in Seville, Spain.

The emphasis on lifelike art extended beyond the world of painting. In Spain, the statues in Passion Week processions became “marvels of realism” because of new materials used in their construction, Father Viladesau said. The statues featured real clothes and actual human hair, and were rendered with new sculpting techniques that created the illusion of real skin, complete with subcutaneous veins.

Statues were also added to shrines as three-dimensional extensions of the Stations of the Cross, he said.

“People reacted to these statues with a sense of actually being present” in the scenes they represented, he said. “It made you part of the drama and made you appreciate what was going on.”

In his book, Father Viladesau deals with new scientific and intellectual trends that marked the coming of the Enlightenment, such as the rise of deism, rationalism, and other secular attitudes. He concludes this book with the start of a new era marked by a break between secular and sacred art. His next book will deal with presentations of the cross that are not connected with Christian theology at all.

The Pathos of the Cross is the third book in a series that Father Viladesau originally saw as only a single volume. The fourth volume—which he’s working on now—will be the last in the series.

Or so he hopes.

“You can never be sure about that,” he said.