skip to main content
Return to Fordham University
You are at:Home»Inside Fordham»Marketing Program Gets High Praise in BusinessWeek 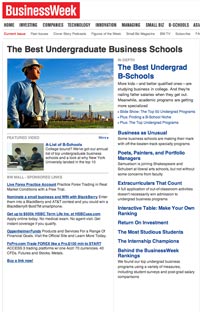 In its undergraduate specialties rankings, the magazine placed the division sixth, just behind schools such as Cornell, Loyola University and William & Mary.

“We were all very pleasantly surprised, but I know we have an excellent group of professors,” he said.

Holden said the survey, which was based mostly on feedback from former students, reflected the well-deserved acclaim of marketing professors such as Janet DiLorenzo, Ph.D., and Lawrence King, Ph.D.

“We’re blessed with people who are staying active in academia and are interacting with the business community,” he said. “New York City is the financial center of the U.S., but we tend to forget that it’s the marketing capital, too. I think we do it better than other people, and I guess BusinessWeek thought so too.”

Holden was also quick to credit Donna Rapaccioli, Ph.D., dean of the College of Business Administration, who noted that in the current economic climate, studying marketing is an attractive alternative to the more traditional finance areas.

While the percentage of students choosing to major in finance this year remained unchanged from last year, students who chose to major in marketing increased from 27 to 29 percent, Rapaccioli said.

“What we’ve seen is some growth in the interesting marketing areas, and part of this is due to the outstanding marketing faulty,” she said.