We like to think we’re a lot more advanced than the humans who roamed the planet centuries ago. But in many respects, our brains haven’t changed nearly as fast as the world around us has. 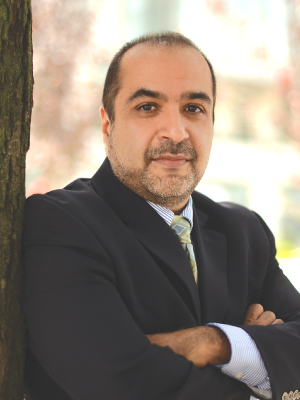 For Hooman Estelami, Ph.D., the intersection between this genetic reality and human consumerism is a treasure trove of research.

Estelami, a professor of marketing in the Schools of Business, studies financial services marketing, pricing, customer service management, and buyer behavior—topics that differ slightly from one another but that are all connected to our innate cognitive abilities.

Take pricing, for instance. Estelami said it’s well known that complicating the price of a product (for example, selling a $6 item for $5.99) can influence whether a consumer chooses to buy it. The tactic is even more effective with financial services such as mortgages (as people purchase them infrequently) or credit cards (as people don’t read the fine print.)

“The deeper question that interests me is, who is responsible for the failure of individual consumers to understand what they’re buying?” Estelami said.

The missing component, he says, is the educated consumer. Children receive thousands of hours of instruction at school in subjects that may have limited practical application, but almost none in financial literacy.

“This is problematic because in many ways, we’re still hard-wired like our ancestors who had to compete with wild animals for survival,” said Estelami.

“The ‘future’ is almost irrelevant to animal behavior because they’re mostly focused on immediate consumption. They find a meal, or something to prey on, and they consume it instantly,” he said.

The modern consumer’s desire for immediate gratification through accelerated and impulsive consumption is not all that different.

Even if you believe humans have a greater capacity for long-term planning, Estelami said that science has shown that the average human brain can process at most seven pieces of information at any given point.

“A simple thing like a bank loan has at least five or 10 attributes, maybe even more. If you’re a good consumer, you’re probably going to want to look at all of your options,” he said.

“[But] you might have to simultaneously process 40 or 50 pieces of information, and that immediately shuts down your ability to evaluate your options accurately.”

The long-term effect of these cognitive limits and financial illiteracy, he said, was evident in the subprime loan crisis when thousands of people took on loans they could never possibly pay back. Many failed to grasp the financial obligations they had assumed.

“There is also plenty of evidence that some in the financial sector target the groups that don’t understand financial services well. So there’s a burden of responsibility there,” he said.

Which is why consumer education cuts both ways, he said. Fordham business students will likely find themselves on the sales side of financial services, and may have to evaluate their own roles in enabling or allowing consumers’ confusion.

In his courses, Estelami uses simulations to help students develop a better sense of their own management styles. A risk taker would do well in a volatile industry; someone more conservative, not so much. Such self-awareness is key to knowing how to respond to an ethical quandary or other challenging decisions related to the marketplace.

“Should you price higher if the consumer is insensitive to the price? The fundamental question is, where do you draw the line? Each person has a different stopping point, and some people don’t even have a stopping point. They’ll take it to the max if they can,” he said.

“We can’t tell our students where you should stop. In fact, I don’t know if there’s a right or wrong answer; it’s context-dependent.”

But the students, he said, need to at least understand where they fit within the industry spectrum.

Given the prevalence of consumers who’ve felt duped in one way or another by the financial services industry, Estelami has also explored what happens when things go wrong. For a forthcoming paper that he co-wrote with colleagues in Sweden, Estelami used data from national surveys to examine instances of consumers reacting against perceived unfairness.

What, they wondered, would drive persons to justify an act of insurance fraud? Would the driving factor be their underlying beliefs or values? Would it be whether there could be any consequences to being caught?

The researchers found that there is a predictable form of reduction in fraud rates if people are more aware of the fact that they can be caught.

“A very small number of consumers, like 2 or 3 percent, is finding more justification for bad behavior,” he said. And their justifications could include the fact that, as Estelami noted, there has been much publicity of incidences of malfeasance by the insurance industry for the last six or seven years.

“There’s a lot of conversation to be had on both sides,” he said.