“The most wonderful years of my life were here.” 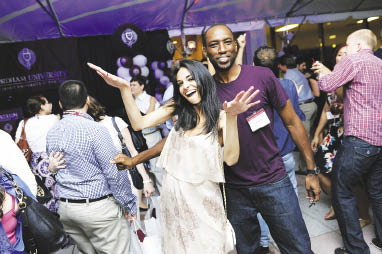 Classes from 1969-2012 were represented at the FCLC reunion.
Photo by Chris Taggart

Charles Priolo, FCLC ’74, was reflecting on his time at Fordham, along with his wife Debra Pena-Priolo, FCLC ’74. The Priolos were two of nearly 600 Fordham alumni who gathered at Robert Moses Plaza for Fordham College at Lincoln Center’s (FCLC) 12th annual reunion on June 15.

Bathed in the late afternoon summer sunlight, attendees shared fond memories, danced to the sounds of a live disc jockey, and noshed on pot stickers, sushi, and chicken skewers.

The Priolos were also celebrating a new chapter, as they’d dated for two years in college and then went their separate ways, marrying others and raising children.

When they reunited in 2004 at their 30th reunion, they were single again, and in 2010, Charles proposed to Debra at the 10th FCLC reunion. They were married this past May.

“We were kids, and we went our way(s), and when we met up again in June ’04, we clicked all over again. We went to dinner the following week, and we’ve been together ever since,” Charles Priolo said.

This year’s reunion was an occasion for alumni to relish the good memories made both uptown and downtown, with the attendance of alumni of the now-shuttered Undergraduate School of Education (UGE), which was housed at 302 Broadway and which pre-dated Fordham’s Lincoln Center campus.

Mannion, who graduated from UGE in 1958, marveled at how she was able to land a job teaching there right after she graduated and found herself teaching night school classes to Korean War veterans.

O’Brien, who started in 1959, recalled how the owner of the restaurant across the street from 302 Broadway stayed open all night when New York City lost power in 1965, making dinner for all with a gas range.

“There was such a sense of community, and of working together for a common cause,” she said. “I think we brought some of that with us up here [to Lincoln Center].”

The transition to a new campus was also memorable. A picture of the Lowenstein Center on the day it opened in 1969, surrounded by vast stretches of concrete, illustrated how much has changed since then.

“I can remember walking into the building for the first time with a few of my colleagues from 302 Broadway, and saying well, if we don’t make it as a school, we’ll make it as a bank,” Mannion joked. “It’s softened up a lot over the years since then.”

The future of the campus was on vivid display across the plaza, where the new law school and residence hall building, currently under construction, are scheduled to open in 2014. Robert Grimes, S.J., dean of FCLC, thanked alumni and friends for their involvement in helping the college fulfill a $16 million portion of Fordham’s $500 million capital campaign, Excelsior | Ever Upward | The Campaign for Fordham.

Father Grimes also singled out the dedication of the retiring faculty by mentioning that this year’s reunion fell upon the Feast of the Sacred Heart of Jesus.

Attendees mingled on the Robert Moses Plaza and inside the Plaza Atrium, as a
DJ spun tunes in a tent nearby.
Photo by Chris Taggart