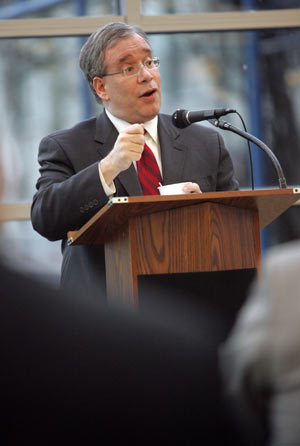 Manhattan Borough President Scott Stringer voiced his concerns about overcrowding in New York City public schools in a speech on Dec. 3 at the Lincoln Center campus.

His presentation, which was followed by a question-and-answer session with Fordham faculty and students, was the first in the Borough President Speaker Series sponsored by the Graduate School of Education (GSE).

Stringer’s appearance came a day after he testified before the New York City Council’s Committee on Education. His speech focused on the content of two reports his office issued in 2008: “Crowded Out” in April and “Still Crowded Out” in September.

Since New York City’s resurgence in the 1990s, Manhattan has become a more attractive place for families to settle, Stringer said. But in many neighborhoods the number of seats in nearby schools has not kept pace with the number of new apartments.
“
We did a report to determine how many schoolchildren will actually live in Manhattan … and what we found is astonishing,” he said. “There is no longer an expectation in large parts of Manhattan, especially lower Manhattan, that there will be a seat for your child in your neighborhood school.”

The result is a new kind of urban flight, Stringer said. In fact, he told the audience that he met a woman at a community meeting in Stuyvesant Town who said she was moving out of the city because her child did not get into the school she had chosen.

“Parents will pack up and leave. Isn’t that amazing? Think about what’s changed over the last 25 years,” he said.

Stringer noted that he voted to give control of the schools to Mayor Michael Bloomberg when Stringer was a New York state assemblyman. Now, however, it has become clear to him that input from parents, teachers and other members of the community is needed to address school construction issues.

“We’ve got to involve our stakeholders in school construction, starting with our local community board,” he said. “Then … we create a land use process for school construction that meets the needs of all parents who want to send their children to New York City public schools.”

Stringer was quick to note that part of the impetus is retaining taxpayers, not just parents with school-age children.

“Everybody knows if you look at what happened in the 70s and 80s, or after the teacher strike in the 1960s, there was a sense that the school system was out of control, so middle class parents left the city,” he said.

“Because things tend to come back around to us, we now have parents faced with high rents and no expectation that they can send their kids to a good public school,” he continued. “They will leave too, and take their tax dollars with them. If that happens, we are right back in the thick of the 1970s.”