skip to main content
Return to Fordham University
You are at:Home»Inside Fordham»Management Professor Seeks to Understand the Nature of Professional Calling 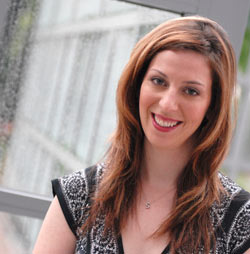 Shoshana Dobrow, Ph.D., is a professional musician and an assistant professor of management systems at Fordham.
Photo by Chris Taggart

The dream of being professional musicians and the romance of being onstage can embed themselves deeply in the psyche of young musicians, many of whom see music as their destiny. Shoshana Dobrow, Ph.D., assistant professor of management systems at Fordham University’s Schools of Business Administration, refers to this phenomenon as a sense of “calling,” and it is something she knows firsthand.

In addition to her academic career, Dobrow is a professional bassoonist with the Rhode Island Philharmonic Orchestra. As the daughter of two musicians, she first became involved in music early in her life. Years later, as a graduate student at Harvard University, however, Dobrow developed a scholarly interest in the dynamics of musicians’ careers under the guidance of one of her advisors who had conducted studies on the job satisfaction of orchestra musicians (and whose findings included the remarkable result that these musicians were less satisfied with their jobs than were prison guards).

“I began to wonder about the psychological orientation that enables people to have the starving-artist mentality,” she said. “How can people be so passionate about a career and yet receive so few rewards in terms of objective outcomes like salary and job security?”

Dobrow hypothesized that many musicians experienced a sense of calling that compelled them to pursue this type of challenging career. In 2001, Dobrow began a longitudinal study of 567 high school musicians attending two prestigious summer music camps—the Interlochen Arts Camp in Michigan and the Boston University Tanglewood Institute in Massachusetts—in an effort to understand what a calling is, how it evolves over time, what factors shape it and the consequences that result. She measured such factors as career advice from parents and music teachers, social influences from peers, and personal satisfaction with music.

Dobrow defines a calling as a heady mix of passion, identity, meaning, urgency and self-esteem. For her, people with a strong sense of calling are imbued with an almost overriding passion for their work—be it music or otherwise—and a sense of destiny and urgency about engaging in that endeavor.

Defining the term was one thing; finding a method to measure the abstract concept was quite another.

Dobrow developed a survey scale to measure a professional calling, opted for a longitudinal approach to explore the elusive phenomenon over time, and drew on an infrequently used statistical method, individual growth modeling.

To date, she has followed the high school students for six years, measuring their musical career plans, the strength of their passion to perform and their involvement and satisfaction with music. She has surveyed the same group of students four times in those six years, as well as interviewed a number of them, and what she has discovered so far has surprised her.

Dobrow has found that a sense of calling changes over time, even within just a few years. Her data showed that 52 percent of the participants had experienced a decrease in the strength of their calling over the course of the study, 36 percent experienced an increase, and 12 percent stayed at the same level. In all, the number of students who said they would not pursue music professionally increased from approximately 12 percent of survey respondents in 2001, when they were in high school, to 30 percent in 2005, when they were approaching the end of their college careers.

And what influenced those changes in the students’ sense of calling for music?

Dobrow found that social influences tend to exercise a powerful effect on a young musician’s change in calling. The research revealed, for example, that students who didn’t enjoy socializing with fellow musicians found their sense of calling waning over time, compared to those students who had a high level of enjoyment with their peers. And if parents did not positively support a student’s sense of calling for music, the student was less likely to pursue music professionally.

“We tend to think of calling as being something very personal and very internal—not something subject to social influence,” she said. “Humans are social animals. We are deeply affected by our social contexts in virtually all domains of life, including in our careers.”

In her last round of surveys, Dobrow also discovered that some 50 percent of the participants said that they spent more time on music than in the previous year, even though the number considering it as a career had declined. For Dobrow, this may indicate an important distinction between the professional and the amateur—one that she plans to study in future states of this research.

“I am finding that my participants can have a strong sense of calling that they maintain for music over time even if they are not pursuing it professionally,” she said. “Amateurs are doing their music purely by choice. Once musicians try to enter the professional ranks, they experience not only the positives of being a musician, but also the numerous negatives of the professional music world.”

The study’s next survey is scheduled for this fall. It will mark the first post-college data collection in Dobrow’s study, and she will be able to investigate how the participants are dealing with the pressures of the real world.

This early career stage, Dobrow said, is critical to a person’s professional identity.

“Most young musicians are rewarded for what they do when they are young with scholarships or public recognition, for example,” she said. “But once they are churned out into the professional music workforce, everything changes. Winning an orchestra job is nearly impossible.”

Dobrow, who plans to follow the students throughout their careers, said that using a longitudinal study to understand career phenomena is an advantageous and necessary research tool because careers unfold across decades. She is hopeful that her research will help pinpoint which factors predict a person’s level of calling over time and what the short- and long-term consequences of calling are.

Such research, she said, could be applicable to any career as a means of measuring employees’ sense of calling toward their work. Managers might use such data when thinking about incentive plans, job design, or their own management styles.

“The sense of calling is incredibly important,” she said. “If you have a strong sense of calling toward your career domain and you are in a job where you feel you are not able to fulfill this calling, then that means you either have to rethink what you are currently doing, find something outside of work to help you have a more satisfying life, or move on. My research is about understanding what kind of meaning we seek to get out of work.”