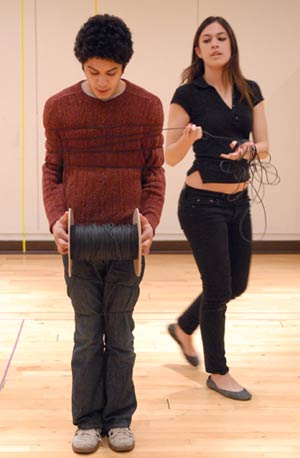 When playwright and MacArthur Fellow Naomi Wallace visited Israel and Palestine in 2004, she came back with a play in mind. Her inspirations, she said, were the tremendous concrete walls that separate the Israeli and Palestinian peoples.

“But I felt that such a project called for other voices than my own,” Wallace said. After receiving a commission from the Guthrie Theater in Minneapolis to write the play, she enlisted the help of two co-authors: one Jewish and one Muslim.

The uniquely collaborative result, Twenty-One Positions, a cartographic dream of the Middle East, will open Feb. 21 at Fordham’s Pope Auditorium. The play tells the story of an American Palestinian man, Fawaz Al Haj, who returns to Bethlehem from his home in Cincinnati to search for his missing brother and is confronted with the essential truths of violence, displacement and loss.

The collaborative team of writers, which includes Wallace, a Kentucky native, Lisa Schlesinger, a Jewish American, and Abdelfattah Abusrour, a Muslim from Palestine, will work on the script until just days before the final dress rehearsal.

Joseph Papp’s Public Theater, which is helping to underwrite some production costs, has joined Fordham as an associate sponsor of the project, and Mandy Hackett, the Public Theater’s associate artistic director, will work alongside the writers.

“The play’s issue is controversial. Palestinians might come and say this is a Zionist play; Jews might come and say it is anti-Semitic,” said Matthew Maguire, director of Fordham’s theatre program. “There is a real impulse among the [three]playwrights to reach out and to see the others. That is their stated hope, and the possibility of it lies in the play itself.”

The play is being directed by OBIE award-winner Lisa Peterson, with original music by Gina Leishman. Since it is a new production (the Guthrie Theater did not option the play), it offers the cast of 10 students a chance to help establish their characters.

“The students will be the first people to walk in these shoes,” Maguire said. “They’ll get firsthand experience of what it is to work on a play just as it is coming into focus.”

Acknowledging the sensitivity of the topic and a chance to explore a contemporary controversy through the lens of artistic expression, Fordham’s Center on Religion and Culture (CRC) and Fordham Theatre are co-sponsoring a public symposium on Feb. 26, “The Wall on Stage: What Divides Israelis and Palestinians?”

Featured in a panel discussion are speakers from all sides of the issue: Alvaro de Soto, former United Nations Under Secretary General and former U.N. special coordinator for the Middle East peace process; J.J. Goldberg, editor of The Forward, a Jewish weekly; Rashid Khalidi, Ph.D., the Edward Said Professor of Arab Studies at Columbia University; and Alisa Solomon, Ph.D., director of the arts and culture concentration of Columbia’s School of Journalism and co-editor of Wrestling with Zion. Patrick Ryan, S.J., the vice president for university mission and ministry, will moderate.
“
Too often, Americans fear to tread on a subject about which both Israelis and Palestinians feel quite free to speak,” said Margaret Steinfels, co-director of the CRC. “[Twenty-One Positions] and its playwrights have provided the occasion for us to join the conversation.”

Both Steinfels and Maguire hope that the play stimulates those whose sympathies lie on either side of the wall to see and hear one another.

“Because it is a controversial issue, it is difficult for many theaters to [produce]it, as boards of directors might say no,” Maguire said. “But Fordham is not necessarily on either side of this fight, so we can attempt to be a moderate forum.”

Lastly, Maguire hopes that students come away understanding that theater is more than just entertainment.

“The vital questions of our day should be on stage, and I can’t think of anything more important than this hotbed in the world, this conflict that is killing us,” he said.