skip to main content
Return to Fordham University
You are at:Home»Colleges and Schools»Gabelli School of Business»Madoff Whistleblower Warns Business Students of Ethics Challenges

Harry Markopolos was managing equity portfolios in Boston in the 1990s when he first heard of hedge fund manager Bernard Madoff and his “really great numbers”—returns so high they were virtually unbeatable. 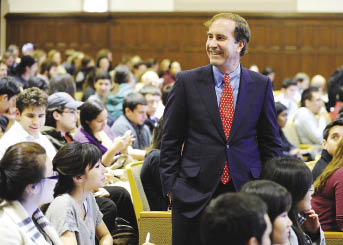 Harry Markopolos told Fordham business students that his discovery of the Madoff scandal led him
to a career investigating white-collar crime.
Photo by Chris Taggart

When his manager asked him to reverse-engineer Madoff’s strategy, he did the numbers and came up with one conclusion: It was a Ponzi scheme.

Unfortunately, his managers wouldn’t quite buy it, he said.

“I’m a derivatives guy,” Markopolos told students on Nov. 17 at the inaugural Ernst & Young Speaker Series, co-sponsored by E&Y and the Gabelli School of Business. “When you tell me my math isn’t good, I want to prove you wrong.”

For the next eight and a half years, Markopolos, who was educated at Jesuit schools, did just that. With a four-member team, he tracked the Madoff organization across two continents partly at his own expense, repeatedly turning up red flags in Madoff’s capital markets behavior and accounting practices.

He reported the information to the financial press, the industry and, perhaps most importantly, the U.S. Securities and Exchange Commission (SEC)—Wall Street’s financial regulatory agency.

“Unfortunately, they (the SEC) were clueless,” said Markopolos, author of No One Would Listen(Wiley, 2010), “and too dumb to be crooked.”

It wasn’t until the financial markets dove in 2008, said Markopolos, that investors turned to Madoff for safe harbor and he ran out of cash, exposing his Ponzi scheme.

“If October 2008 hadn’t happened, Bernie would be well on his way to $100 billion and he would be victimizing the Asians,” Markopolos said. “Because that’s where he was headed.”

Markopolos outlined some capital market red flags he found along the way:

• Madoff’s fund performance showed a steady 45-degree upward angle from 1990 until the 2003 bear markets, a trend that “does not exist” in finance;

• Madoff, who was leaving no footprints in the market, claimed to be an “over-the-counter” trader with such remarkable stock picks (30 through 50 percent returns) that he would have had to have perfect market-timing ability;

“This was like a baseball player batting .964, and only hitting doubles,” Markopolos said. “That is how unusual his return stream was.”

Some accounting inconsistencies that Markopolos found were:

Nine people have been arrested in the Madoff scheme, including Madoff’s accountant, David G. Friehling.

But even with the resulting suicides and international intrigue, Markopolos said the Madoff scheme pales in comparison to huge government-sponsored bank bailouts.

“That is why you have Occupy Wall Street and the Tea Party. No one has faith in their governments anymore.”

Warning business students about the ethical choices they will face in business, he stressed the need to be persistent when something doesn’t seem right.

“If you are going to work on Wall Street, then crossing that line . . . when you see everybody else doing it . . . is easy,” he said. “Once you see that line, remember you have a decision to make. Otherwise, in a few months you are so far past the line you don’t even know where it was.”