skip to main content
Return to Fordham University
You are at:Home»Inside Fordham»Loyola Hall Jesuit Residence Gets a New Wing Named for Peter Faber 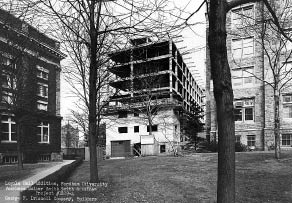 In April 1959, Fordham President Laurence J. McGinley, S.J., announced that the University’s Jesuit community would gain a new seven-floor living space with the addition of a wing to their residence at Loyola Hall.

The new building would allow Jesuit faculty to vacate Martyrs’ Court, freeing it to house another 75 students on campus. When the 100-room wing opened, it would have a reference library, recreation room, kitchen, chapel, infirmary, two reception rooms, and a dining room large enough to serve the entire Fordham Jesuit community. The addition was named for Peter Faber, an early follower of St. Ignatius Loyola.

In announcing the addition, Father McGinley noted that “no funds available for the University’s educational purposes will be applied” to the project. The members of the Jesuit community met the project’s $1.25 million cost through government funds, and proceeds from their lectures and book sales, according to The Ram.