skip to main content
Return to Fordham University
You are at:Home»Inside Fordham»‘Love Poem’ to Kennedys Gets New York Premiere at Fordham 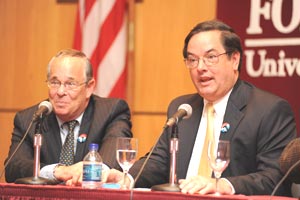 A documentary about the Kennedy family that was based on a book by Thomas Maier, (FCRH ’78) received its New York premiere on Wednesday, Nov. 12 at Fordham.

The Kennedys: America’s Emerald Kings was directed by Robert Kline, a former vice president at 20th Century Fox and co-founder of the Lifetime cable network.

“My experience working for Robert Kennedy lit a fire in me, and led to my lifelong commitment to make a film honoring the family’s legacy,” Klein said. “Maier caught the essence of the story I wanted to tell—poverty in Ireland and discrimination in the United States, which they transcended to claim the nation’s highest office.”

The evening was sponsored by the Institute of Irish Studies at Fordham and Warner Home Video.

The film, which runs just over two hours, offers an exhaustive history of the Kennedy family. It travels well-worn paths that include the tragedies of President John F. Kennedy and his brother Robert, but also features lesser-known information about the family’s political roots in Boston; the dashed presidential aspirations of patriarch Joseph P. Kennedy; and the family’s philanthropy.

Preferring to call the film a “love poem” to the Kennedys and the generations of Americans they inspired, Klein said he purposely chose not to mention the scandals that have provided fodder for numerous Kennedy books and films through the decades.

Emerald Kings is bolstered by historic footage taken from the archives at the John F. Kennedy Presidential Library and Museum. “We signed a deal for comprehensive access to their collections,” Klein explained. “Much of what we’re showing is not available for public viewing even at the Kennedy Library.”

The Kennedy legacy was discussed in a post-screening forum that focused on the family’s Irish roots and the discrimination they faced while ascending the American political and social ladder.

“John F. Kennedy, from a historical perspective, was the first person from a minority background to be elected president,” Maier said. “To do this, Joe Kennedy was very aware that he had to present Jack as WASPier than the WASPs.

“The Kennedys were much more Irish than people realize, but they wanted to keep that at bay,” he added.

“Seeing this film, it reinforced for me how much it took to get a Catholic elected president in 1960,” said James T. Fisher, Ph.D., co-director of the Francis and Ann Curran Center for American Catholic Studies at Fordham. “We really don’t see politicians today on the national stage discussing the theological issues with the deftness that JFK did.”