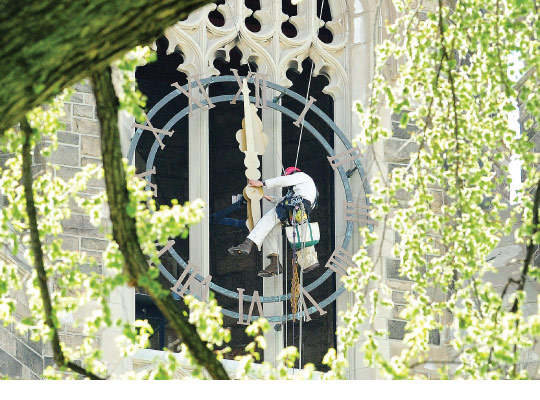 Neither time nor tide waits for Rams.

Denizens of Rose Hill traversing Edward’s Parade no longer have an excuse for ignoring the hour before them. After a long time frozen in place, the arms of the four-faced, 78-year-old clock atop Keating Hall are turning once again.

The arms, which weigh approximately 50 pounds each, were removed in the winter and refurbished with an eye toward being ready for the May 17 commencement. They were reinstalled earlier this month by rope-access technicians from Vertical Access, overseen by Structure Tone Contracting. Vincent Burke, director of capital programs and planning in Facilities Operations, said the original gears that propelled the clock had worn down. The replacements (which were custom-made by Verdin Clocks in Cincinnati) are larger and stronger.

Also installed were four 400-watt speakers that upgraded the ability to broadcast chimes and hymns. Eventually, the tower will be illuminated as well.

Burke said he considers his job a success when someone looks at a feature of the campus and assumes it’s always been there.

“It’s a constant effort to make Rose Hill be the best-looking campus you’ve ever seen,” he said.