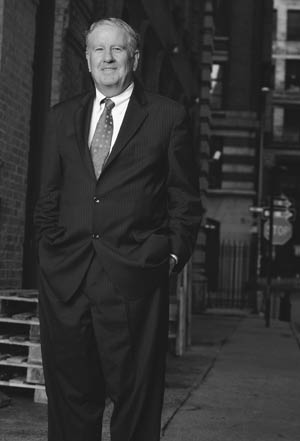 John D. Feerick, J.D., the Norris Professor of Law at Fordham University School of Law, was appointed chairman of the State Ethics Commission by Gov. Eliot Spitzer and Lt. Gov. David Paterson in Albany on April 16.

“Dean Feerick has devoted his career to promoting greater public trust in government,” Spitzer said. “The distinguished professional background and personal credibility he brings to the State Ethics Commission will help ensure that our public officials and employees maintain the highest ethical standards, which are central to an open and accountable state government.”

Under the Public Employee Ethics Reform Act of 2007, passed earlier this year, the State Ethics Commission and the Temporary State Commission on Lobbying will be merged in September into a single Commission on Public Integrity. Spitzer also announced his intention to name Feerick to serve as chairman of the combined entity.

Feerick has a distinguished record as a public servant, attorney and educator, having served as dean of Fordham Law School from 1982 to 2002, and he is the founding director of the Law School’s Feerick Center for Social Justice and Dispute Resolution.

Feerick was a member of the law firm of Skadden, Arps, Slate, Meagher and Flom from 1961 to 1982. He also participated in the formulation, adoption and implementation of the 25th Amendment to the U.S. Constitution, which relates to presidential succession and was ratified in 1967.

Feerick has been recognized for his extensive work in the field of ethics reform. He is the recipient of honors and recognitions from various groups, including Common Cause, The League of Women Voters and the New York Lawyers for Public Interest. He has received the highest awards from the New York State Bar Association, the Association of the Bar of the City of New York and the New York County Lawyers’ Association for his contributions to the legal profession.