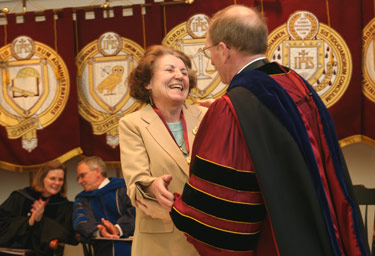 Fordham honored 43 of its most loyal employees on March 7 with awards for their longstanding dedication and service to the University community.

Fordham’s newest award, the Sursum Corda award, recognized three employees for outstanding contributions to the life and mission of the University. They are: Stephen Bordas, associate vice president of the Enrollment Group; Lydia Ocasio, senior executive secretary for the Office of Academic Programs; and Victor Birone, foreman of the University’s carpentry shop in Facilities Management.

“These awardees have spent their careers teasing greatness out of our students,” said Joseph M. McShane, S.J., president of Fordham, who thanked each recipient personally. “They have imparted to each student they help a set of beliefs that have animated Fordham for over a century—that life is worth living, that each human is worthy of respect, that they are called to use all of their talents to advocate for a just world.”

More than a few of the awardees, however, had much to say about what Fordham had given to them as well.

“It’s a two-word summary—academic freedom,” said Warren W. Tryon, Ph.D., professor of psychology. Tryon, who is among nine faculty members who have worked at Fordham since 1970—his entire academic career—said that the University has always supported his research on hyperactivity disorders and other topics.

“If you are able to pursue your interest as you see it and be supported in that, why would you want to be anywhere else?” Tryon said.

For 40-year awardees Kristin O. Lauer, Ph.D., associate professor of English, and John P. Entelis, Ph.D., professor of political science and director of the Middle East studies program, the rewards have come in the form of watching their students flourish in their own careers over many years. “I’ve taught my philosophy here at Fordham, which is to ‘pass it on,’” Lauer said. “And that’s what I have watched my students do.”

Mark Naison, Ph.D., professor of history and African-American studies, recipient of a 40-year Bene Merenti, said the University has given him “a community where my beliefs about social justice are welcomed and respected.”

Archbishop Hughes awardee Casimira M. Stricker, manager of Fordham’s IT business office, said that, in the course of 40 years at Fordham, she has been able to raise her family, move up in her career from clerk to manager, and to earn a degree by attending night classes.

“I consider Fordham as my second home,” she said, pointing proudly to daughter Katherine Egan, executive director of the Strategic Program Office. Egan was honored in the same ceremony for her 20 years of service to Fordham.

Sursum Corda awardee Victor Birone, who recently worked on restoring the University Church’s wooden doors to their original grandeur, said that being hired by Fordham some 20 years ago led to a multitude of personal rewards—from having a chance to apply his artistic and carpentry skills to his job, to “feeling appreciated in everything I do.”

“I didn’t think I would stay here this long,” Birone said. “But now I don’t think I’ll ever leave. I feel part of something.”