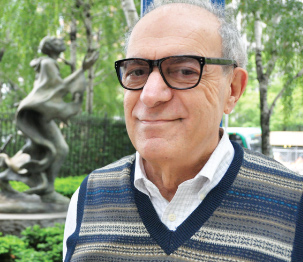 Bruce S. Cooper stays abreast of education trends by working closely with students on their dissertations.
Photo by Patrick Verel

Cooper, a professor of education at the Graduate School of Education’s Division of Educational Leadership, Administration and Policy, who had been teaching and writing at Fordham since 1982, wanted more collaboration.

“The bell rings, you close your door, and you’re always working alone. It’s very isolating and very lonely to be a teacher,” he said.

A specialist in public policy, economics, and the politics of education, Cooper began teaming up with students and colleagues to pen papers on subjects ranging from special education and unionization to the professionalization of the education field.

In his 31 years at Fordham, Cooper has tackled a variety of topics in 34 books and countless papers, including many firsts—from the first home schooling manual to the first book to compare teachers’ unions in 16 countries. He also holds a patent for In$ite, a finance analysis model for education that he helped develop in the 1990s as a consultant for Coopers & Lybrand, L.L.P.

As private schools, such as those run by the Catholic Church, are a big part of Cooper’s research, he recently co-wrote “An Emerging ‘Middle Way’ in Public and Private Education?” with Arthur Plaza, who is interested in education leadership, for Religion in the Public Schools: Negotiating the New Commons (R&L Education, 2013).

Catholic schools are in dire straits, having dropped from a peak of 17,000 schools enrolling almost 5.66 million children in 1965, to 8,000 schools enrolling just 2 million students today. Cooper said that’s a cause for concern because it threatens parents’ educational choices. Cooper has written about the benefits of home schooling, in Home Schooling in Full View—A Reader (Information Age Publishing, 2005).

“It’s better that public schools are not a total monopoly,” he said. “Anything that’ll break the monopoly and give families more choice, particularly poor families or urban families, I think all that helps.”

He is currently finishing a book with Sharon Conley, Ph.D., professor of education at the University of California-Santa Barbara, on how to make teaching more professional.
“In order to be a professional, you have to be collegial and work together. If you’re a doctor and you have a problem, you call another doctor [to]help you,” he said.

The book builds on the work of Dan C. Lortie, Ph.D., professor emeritus of education at the University of Chicago, whom Cooper studied under in the 1970s. Lortie noted it was easier to become a nurse than a doctor, or a teacher than a school superintendent.

“We took Lortie’s ideas of the ‘semi-professions’ and talked about how to make teaching more professional, building a learning community where teachers work together . . . share ideas, help each other, and criticize each other.”

Cooper has maintained relationships with those students who have studied with him, building many professional collaborations. Last year he co-published, with Caroline Strax, Ed.D., GSE ’95, and Marshall Strax, Ed.D., GSE ’92, a book, Kids in the Middle: The Micro-Politics of Special Education(Rowman & Littlefield, 2012).

Today 12 to 13 percent of children in the United States are classified as having a disability, and yet they consume almost a third of the money spent on education, he said. This sets up contentious debates about funding.

“They need an aide, and they need transportation to and from school, so the costs have really gone up,” he said. “A child could be in a gurney and brought to school in an ambulance every day. Someone has to drive the ambulance. Somebody has to help them out of the ambulance and into class. [And then] there is the challenge to teach kids who can’t stand up or sit properly.

“At some point leaders are going to have to decide what to do to help these students without taking a lot of money away,” Cooper said.

Collaboration with students keeps him up on current trends in education, he said. Recently, he ventured into the realm of higher education with “They’re Transfer Students, Not Cash Cows,” in which he shared a byline with Alexander P. Ott, Ed.D., GSAS ’96, GSE ’12.

The article, which lambasted colleges for requiring students to make a nonrefundable deposit in exchange for learning how many of their credits might transfer from a previous school, was Ott’s doctoral dissertation. Cooper helped him distill it into a digestible, more mainstream format for publication in the Chronicle of Higher Education’s March 18, 2013 issue.

Cooper sees his role as teacher and writer as that of “keeping up on the latest developments; socially, economically, politically, and educationally,” rather than focusing on one narrow research problem for a full career.

“Collaborating with others keeps me alive, busy, and involved. That’s very important,” he said. “It’s also gratifying to help students publish their research. They’ve worked so hard on their dissertations that they deserve to have their work seen.”