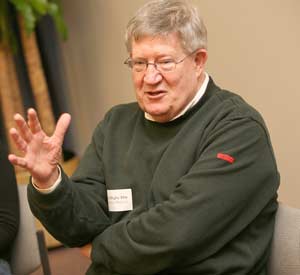 Richard Digby Day has reinvigorated the London Dramatic Academy, a study-abroad program that will accept two Fordham students in the spring.
Photo by Michael Dames

Fordham’s Lowenstein Center hosted three master classes on Oct. 1 as part of an open house for the London Dramatic Academy (LDA), a study-abroad program in England administered by the Fordham University London Center. LDA will accept 30 students from all over the United States, including two from Fordham, for the Spring 2007 Semester, said Sabina Antal, assistant director of International and Study Abroad Programs at Fordham.

Guest host Richard Digby Day, artistic director of LDA since 2003, said every aspect of theater is craft. “A sense of wonder and art is something we hope to achieve, [but]we have to be satisfied with excellent craft,” he said. According to him, people cannot be made into actors: “We can only make people who want to be actors better.”

Digby Day, a graduate of the Royal Academy of Dramatic Art, recently reorganized the 25-year-old program, which now gives American students experiences similar to those of a British drama school. Digby Day is credited with giving Ralph Fiennes, Hugh Grant and Oscar nominee Imelda Staunton their first work in the theater.

“Complete actors need lessons in movement, dance, stage combat, and technique,” Digby Day said. “They need to know the history and background of plays…and to be in command of the speech, voice, and dialects of language.”

“Dance is movement, and movement is life,” said Angela Hardcastle, former ballet mistress of the English National Opera, whose master class presented dance as part of a social continuum. “Historical dance is one of the real ways to get in touch with a period of time,” she said, demonstrating the steps of a medieval/renaissance dance.

Language was next on the agenda. “Shakespeare invented more words than anyone in the English language,” Digby Day said, then “translating” 35 lines of Antony and Cleopatra from Elizabethan to modern English. He said a Shakespearean scene could be understood by examining its context, meaning, pronunciation, rhythm and cadence.

“I did not realize that so much about the characters in Shakespeare could be learned from so few lines,” student Justine Rella said.

Gillian Lane-Plescia, a former Julliard instructor, began her workshop in accents and dialects with an exercise in listening. She played a tape with different English-speaking voices and tested the group on each speaker’s country of origin. Lane-Plescia also encouraged the students to start working on an accent as soon as they are aware of a part, and recommended the use of tape recordings, not films. “You want sound, not actions,” she said. After learning Welsh vowel sounds and inflections, the workshop finished with a reading of a passage from Dylan Thomas’s Under Milk Wood.

The event offered a small glimpse into the intensive 14-week program, a “theatrical boot camp,” the goal of which is to give LDA students practical experience and a genuine appreciation of theatrical craft.

By Dale Cohen and Brian Kluepfel