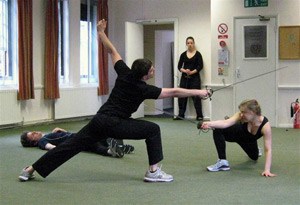 The London Dramatic Academy hosts historical dance and stage combat demonstrations based on the last scenes of Shakespeare’s Henry IV, Part I.

The last week of April marked the end of the London Dramatic Academy’s spring 2010 semester.

The academy, housed at Fordham’s London Centre at Heythrop College, hosted historical dance and stage combat demonstrations based on the last scenes of Shakespeare’sHenry IV, Part I.

The week also included final showings of acting projects and scenes from The Merchant of Venice and As You Like It, under the direction of Michael Winter. Students met individually with the full faculty to discuss their progress. A tea party on Friday celebrated the successful completion of the program.

This semester, the London Dramatic Academy (LDA) hosted visits from Matthew Maguire, head of Fordham Theatre, who saw the work of the academy for the first time. Also visiting was Alan Wade from George Washington University, who brought his students to a lecture/master class by Richard Digby Day on A Midsummer Night’s Dream.

LDA students made several theatre visits this semester, including a trip to see the Mark Morris Company at the London Coliseum. There were two excursions to the National Theatre to see highly contrasting works: Alan Bennett’s The Habit of Art, a meditation on the nature of artistic inspiration using W.H. Auden and Benjamin Britten as the principal characters; and Bulgakov’s The White Guard, a play set in Russia during the civil war following the Communist revolution.

Faculty and students also visited the British Museum, the Royal Academy exhibition of Van Gogh’s letters and paintings, and Stratford-upon-Avon.