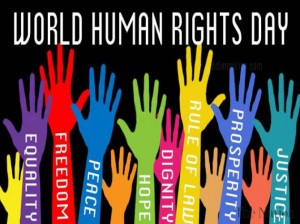 “Eric Garner getting killed for having cigarettes in his hand is just too much,” said Tina Maschi, Ph.D., associate professor at the Graduate School of Social Service (GSS). Maschi was speaking of Fordham’s Second Annual Human Rights Day Celebration, when her conversation took an invariable turn toward current events that carry an intractable link.

On Dec. 13 from 10 a.m. to 9 p.m, GSS’s Be The Evidence Project will mark Human Rights Day, which officially takes place on Dec. 10., with a daylong event at the Pope Auditorium. GSS students will present research and several films will be screened, followed by panel discussions. The event is free and open to the public.

Since the United Nations adopted the Universal Declaration of Human Rights on Dec. 10, 1948, Maschi said that much progress has been made, but much needs to be done on a local level. She quoted Elanor Roosevelt, who was instrumental in drafting the Human Rights document.

“Where, after all, do universal human rights begin? In small places, close to home—so close and so small that they cannot be seen on any map of the world,” Roosevelt said in 1958. “Yet they are the world of the individual person: the neighborhood he lives in; the school or college he attends; the factory, farm or office where he works.”

“Our human rights are not far away, but close to home—right here in New York City,” said Maschi. “We’re a microcosm of the world, we have all the diversity. And if we find a way to respond to human rights here, we can be a model for the world.”

Maschi said that many civil rights issues are human rights issues that stretch far beyond any one issue. Issues are diverse and one need not limit oneself to one area of concern.

“I have multiple social locations that make want to speak out. It’s not just about me but what’s happening with other people. We need to really examine older people’s rights, racial justice, prisoner’s rights, women’s rights, gay rights,” she said. “It’s about treating people with respect.”

The evening films will begin with Edie and Thea: A Very Long Engagement at 5 p.m. A second film, Building a Partnership Society, begins at 7 p.m.