skip to main content
Return to Fordham University
You are at:Home»Inside Fordham»Line Between Divinity and Lunacy Explored at Panel 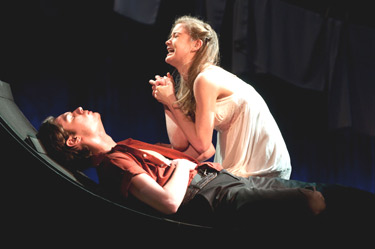 In a scene from Maria Irene Fornes’ play Sarita, the lead character (Rebecca Ballenger) grieves over the body of Julio (Thomas Pecinka), whom she has just stabbed to death after a confrontation. Though done in self-defense, the act drives her to madness.
Photo by Leo Sorel

Can one person’s spiritual awakening be placed in the same category as another person’s bout with psychological illness? How, exactly, is a theatre production similar to a Mass?

Those were among the sticky questions that a panel debated on March 2 at Fordham’s Lincoln Center campus.
“Religion and Madness: Spirituality and Pathology,” a forum co-sponsored by the Fordham Center on Religion and Culture and Fordham Theatre, dwelled on the prominent role that madness plays in theatre and—to a much more controversial degree—in religion.

In a packed Pope Auditorium, scenes were performed from the four plays in Fordham Theatre’s 2009/ 2010 season, dubbed a “Season of Madness” because of the thematic thread that ran though the pieces. They included:The Day Room, Mrs. Packard, Sarita andHamlet.

Matthew Maguire, director of the theatre program, moderated the panel, which featured:

• George Drance, S.J., Fordham’s artist-in-residence and author of Working on the Inside: The Spiritual Life Through the Eyes of Actors (Rowman & Littlefield, 2003),

• James Jones, Ph.D., clinical psychologist and professor of religion at Rutgers University, and

• Broadway actress Julie White, who won a 2007 Tony for her performance in The Little Dog Laughed.

The scenes provided a jumping-off point to discuss madness as a social construct. The panelists also debated whether the external forces that drive a person mad might lead to spiritual bliss in another person, provided the second person has a stronger psyche.

Father Drance noted that in contemporary culture, questions of madness and spirituality are viewed primarily through the lens of empiricism, which relies on observable evidence to frame reality.

“We tend to reject that which goes against what can be verified empirically,” he said. “In our culture, we find ourselves mistrusting unverifiable aspects of our lives. Imagination, emotion, intuition and revelation—these are precisely the places where religion and madness play.”

Jones said that symptoms of madness can be understood as cultural constructions.

“Is it madness to encounter the blessed Virgin Mary? Is it madness to be aware of the presence of, and converse with, a beloved spouse or parent who died recently? Is it madness to pray for a sick person with a profound expectation that they will recover?” he asked. “Forty years ago, the local family shrink was taught that such things were signs of illness and required medical intervention.”

He also wondered if theatre can be a container for a maddening impulse that otherwise might have been channeled exclusively toward religion. Regardless, he urged more compassion for those on the ends of the mental health continuum.

“Under stress, trauma and shock, we may all slide toward the pathological end,” he said. “If we get enough social support, perhaps even a spiritual discipline, we might move toward the healthy end.”

It was Maguire, however, who made the most explicit connection between the religious fervor behind the ritual and sacraments of the Mass and the madness inherent in drama, which is the driving factor of a theatre production.

“When I learned as an altar boy about transubstantiation, I realized that there was a mystic difference between Catholics and Protestants. Catholics believe that the bread and the wine literally become the flesh and blood of Christ,” he said.

“I think that’s what happens with the stage. There’s a transubstantiation—that what we put on the stage is just lumber and hardware and Fordham theatre students. But because we believe, it transforms, and it becomes the thing itself. We impart in a mystical action, and it’s so important that the audience is here, because it’s a communal event.”