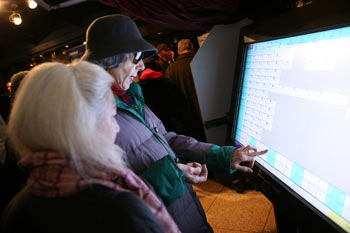 Hundreds of New Yorkers were anxious to try out the machines, slated to be in place by the 2008 elections.
Photo by Michael Dames

On Jan. 10, the New York City Board of Elections hosted a discussion and demonstration of the new voting machines by the four vendors competing to replace the familiar lever-operated Lieber voting machines. The event drew hundreds of interested New Yorkers, including many poll workers and inspectors, to Fordham’s Lowenstein Center to quiz company representatives and test out the equipment.

Joseph Muriana, Esq., associate vice president for government and urban affairs, said Fordham was “being a good public citizen to facilitate this important event for our neighbors residing in the borough of Manhattan,” by hosting the forum, which was split between the Pope Auditorium and the Lowenstein lobby. The vendors—Diebold, ES&S, Sequoia and Avante—attempted to address issues like machine and software security, disabled access and an auditable paper trail. Muriana said that “these are issues which are critical to the very integrity of our representative democracy.”

John Ravitz, executive director of the city’s Board of Elections, said the evening gave the public “the opportunity to touch, feel the machines, and see what you like and don’t like.” Vendor representatives were allowed fifteen-minute presentations inside the Pope Auditorium, followed by 10-minute question-and-answer sessions, while the machines were open for hands-on demonstrations in the lobby for four hours.

New York state plans to have all the voting machines in place for the 2008 federal elections, and is already facing monetary penalties for having not yet implemented a new system.