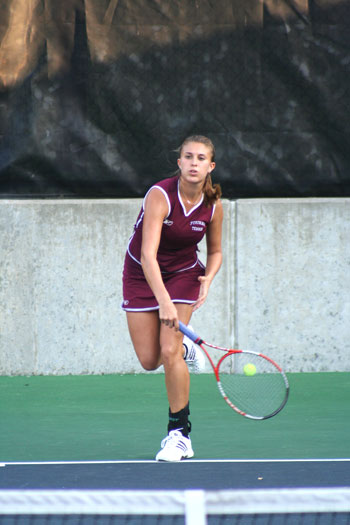 Senior Dominique Liguori has not lost a tennis match for Fordham in more than two seasons.
Photo courtesy of Fordham Athletics

Occasionally, an athlete comes along who dominates his or her particular sport. SeniorDominique Liguori, a player on the Fordham University women’s tennis team, held such sway over the past four years.

Liguori closed out her career with a second consecutive undefeated season, compiling a 19-0 record in 2008-2009. In addition, she won the first singles title at the 2008 Eastern Collegiate Invitational in September at West Point.

Liguori, who entered the invitational as the No. 1 seed at first singles, defeated Army’s Anne Houghton in straight sets in the championship round to claim her title. She took the first set 6-3 from Houghton, the No. 2 seed, and then wrapped up the championship with a 6-2 win in the second set.

Liguori advanced to the finals with a straight set victory over the University of Maryland, Baltimore County’s Ana Mungro in the semifinals. Liguori won the first set 6-2 and led the second set 1-0 before Mungro retired due to an injury.

Liguori defeated Pittsburgh’s Minh Evans, the No. 5 seed, in the quarterfinals in straight sets, 6-0 and 6-1.

It seems that tennis success runs in her family. Her mother, Bette-Ann Speliotis Liguori, FCRH ’83, was inducted into the Fordham Hall of Fame in 2003 for her own tennis exploits.