skip to main content
Return to Fordham University
You are at:Home»Inside Fordham»Lifelong Learner Turns to Books After Retirement 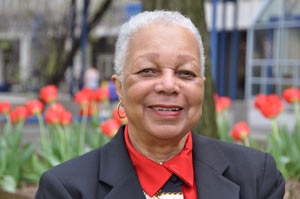 For 43 years, Winifred Grant worked for AT&T’s New York Telephone. She started as a telephone operator with a headset, sitting in front of a plug board.

Grant worked herself up from switchboard operator to a public relations department manager, a position she held for 20 years, even as antitrust laws led to the development of a new phone company, NYNEX, in the 1980s.

After 43 years of work and a few decades of raising a family, Grant knew it was her time. She wanted to learn.

“The company had given us lots of management training over the years, but that was different,” Grant said. “I wanted to try my hand at going to school again, to see how I did in a college classroom.”

Grant had already had a taste of college when she was a young woman. The first generation American child of Jamaican immigrants (her mother was a domestic; her father was an electroplater) had attended City College for a few semesters before the demands of work and real life made her stop.

Going back to school at age 65, however, was an awfully big bite; Grant searched thoroughly for a program that she thought would suit her needs, and chose Fordham’s College at Sixty.

“The students were all older, and the professors were great,” Grant said.

An avid traveler, Grant had a natural interest in the history of countries to which she had traveled. She took some courses on New York history and Middle East history and found out that she could qualify for credit if she did a final paper at the end of the semester.

“I did my papers, and I guess I passed,” she laughed. “I got into the liberal studies program.”

When it came time for her to declare a major in Fordham College of Liberal Studies, she thought she would first try English. “But Beowulf was too much!” she recalled. She finally switched to history, carried over some City College credits and got busy with required courses.

As she took daytime courses on Europe, the Crusades and the Middle East, Grant found herself mingling with regular college students.

“I was in class with 15 or 20 young people, and I found them to be wonderful,” said the 82-year-old native New Yorker. “If I happened to be out, then when I returned the kids would say, ‘I don’t take the best notes, but do you want to borrow them?’

“I don’t know if every college is like Fordham, but the kids that gravitate here just seem to be wonderful kids.”

Grant said that her husband and son both encouraged her to try her hand again at college, and for that she was very thankful.

Grant finished up her final credit requirement with a “Life Experience” paper, one of the options offered to students who have had a career in the workplace. She wrote about her climb from operator to manager during the four decades that saw many changes for African Americans in the workplace.

She, unfortunately, will miss her commencement ceremony; the world traveler will be spending the week relaxing on the beach in Hilton Head, S.C.

“I feel very satisfied,” she said. “One never stops learning.”