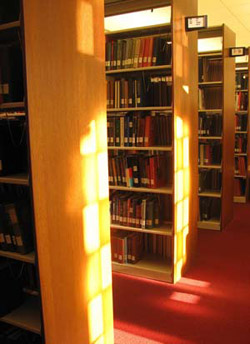 Fordham’s Quinn Library, Gaines Library, and William D. Walsh Family Library, which together house a collection of 2.2 million books, have made the list of top-five Interlibrary Loan (ILL) lenders in New York state for the seventh straight year.

During Fiscal Year 2006-2007, the library lent 16,614 books to other university libraries and public library systems, making it the fifth-largest lender in the state. In addition, Fordham students and faculty borrowed 10,179 titles from other libraries, ranking the University 13th in borrowing.

“Fordham University has a collection that offers a lot of resources for students and faculty as well as the general population of New York state,” said James McCabe, Ph.D., director of the library.

McCabe said the library buys about 30,000 new titles each year and is the fifth-largest library in the state. While online research searches appear to be growing by 5 to 10 percent annually, McCabe said, newly published books are generally not available online and must be borrowed.

In the United States, the ILL system works through two clearinghouses, the Online Computer Library Center (OCLC) and the Research Libraries Information Network (RLIN). Member libraries, which are largely academic and public facilities, file requests they receive for books, and other libraries respond to the requests. A complete database of books and other available materials is searchable online.

“We try to be as generous lenders as we can be,” McCabe said. “Because it works both ways. Fordham has developed a reputation for filling requests it gets from other libraries. As a result, when we make a request we have no trouble finding a library that will fill it. This makes Fordham that much more competitive in getting students and faculty the materials they need.”

Charlotte Labbé, head of Fordham’s ILL, said that the library also receives requests from outside agencies such as CBS News, the Supreme Court Library and Time magazine. She pointed to the library’s response time as an important factor.

“Our average turnaround time for lending is a day and a half, from the time we receive the request until the time we fill it,” Labbé said. “We’re a large lender because people like our service as well as our collection.”